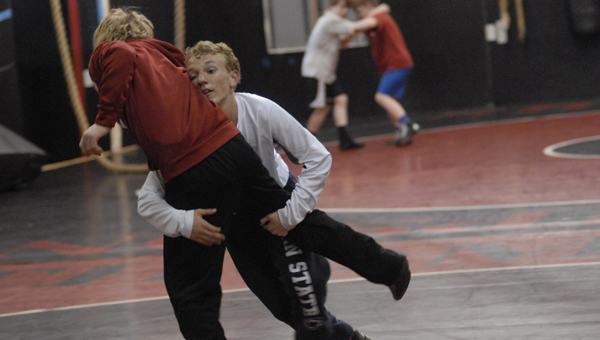 CALERA – Tucked off U.S. 31 a few miles north of the intersection with AL-70, technically located in Calera, directly behind the Southeastern Pond Management building is the Warrior Wrestling Club. The Club is a two-story structure that contains living quarters, a weight room, a few sparsely-used conference rooms, locker rooms, and of course a massive wrestling mat. This is the factory that has churned out numerous high school All-Americans and is responsible with supplying the majority of the roster for five-time defending state champion Thompson.

“This kind of facility is the only one in the state,” Head coach Shad Rissler explained during an April 2 interview. “And it’s one of the only ones in the Southeast, where they have living quarters, and there’s a kitchen in there and everything.”

Rissler came to the club three years ago. A New York native, Rissler is a fast-talking, high-energy coach whose backstory is heavily intertwined with wrestling. He was a collegiate All-American wrestler who trained with the US team after he graduated. His time with the US team took him to Bulgaria, Turkey and the Ukraine to compete and train. After his stint abroad he came back stateside and now spends his days training future wrestlers.

The Warrior Wrestling Club is something of an oasis in a vast wrestling desert. The sport does not hold the same clout in this area of the country as it does up north, and as a result the Calera-based club is the only haven for wrestlers within a rather large geographical area.

“In New York you’ll have 5-6,000 people come to a match,” Rissler said. “Football games might get 300. With that, there’s a wrestling club on every corner. There’s none like this, but there are more opportunities.”

The club season essentially runs for as long as the high school season is on hiatus, from mid-February to October. During that time, Rissler takes his troupe to as many tournaments as possible to get his wrestlers attention from national ranking websites and colleges alike. The club maintains about 50 members during the offseason, with kids ranging in age from grades K-12, with a large concentration being above seventh grade.

Rissler credits the skill of the coaches and the support of the community as the main factors in the club’s ability to thrive.

“The families and the community we have behind is us way more (supportive) than anywhere else,” Rissler opined.

Rissler has no plans to leave the club for another coaching opportunity, and there is no reason to suspect the club will do anything except continue to train exceptional wrestlers for years to come.