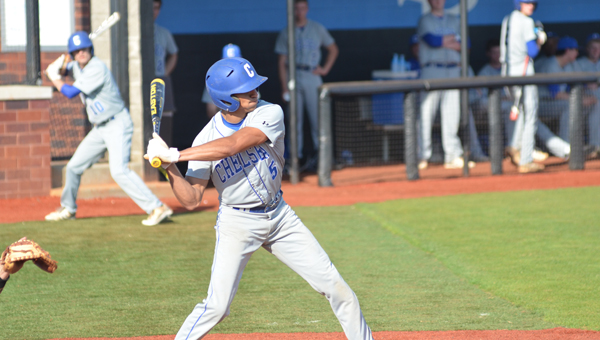 Austin Chadwick and the Chelsea baseball Hornets advanced to the finals of the Lake Martin Baseball Classic, which took place from March 30-April 2. (File)

ALEXANDER CITY – From March 30-April 2 the Chelsea baseball Hornets participated in the Lake Martin Baseball Classic, which took place in Alexander City. The Hornets won four out of six games at the tournament and made it to the championship game before falling to champion Handley 15-6.

After winning three out of four games in round robin play, the Hornets advanced to the semifinal round alongside Beauregard, Briarwood and Handley. Chelsea won its semifinal game against Beauregard in thrilling fashion via a 9-8 decision to advance to the finals.

Five separate pitchers took the mound in this high-scoring affair. Trey Coman started the game for the Hornets and lasted four innings before being relieved. Brendon Case, Tyler Blackburn and Tanner Masters all saw time on the mound before Jake Posey came in to close the game in the seventh inning.

This was a back-and-forth affair, and the Hornets of Beauregard were up 7-4 going into the sixth inning before Chelsea ripped off a four-run sixth inning to take the momentary lead. Beauregard responded with one run in the bottom of the sixth, and the two teams took an 8-8 lead into the last inning of play.

In the top of the seventh, Riley Watkins hit a leadoff double before the next two Chelsea batters promptly flew out to centerfield and second base, respectively, to leave Watkins on second base with two outs. Blackburn was the next batter, and drew a walk after an eight-pitch at-bat. Austin Chadwick stepped up to the plate next and took the second pitch he saw to center field for a single, which was good enough to score Horton from second and give Chelsea a sliver of a lead.

Posey took the mound in the bottom of the seventh and thwarted Beauregard’s comeback attempt to get the win and advance to the finals. Chadwick went 3-for-4 from the plate with one RBI to lead Chelsea from the plate.

The Hornets took a 6-5 lead into the fifth inning before Handley knocked nine runs over the plate in the course of the last three innings of the contest to get the win and claim the tournament title. Jacob Green went 3-for-4 from the plate with a double to lead the Hornets in the championship game. After the tournament, Chelsea’s record stood at 18-13 on the season.

Leroy Moore finished second in the 100-meter dash and the 200-meter dash at the Birmingham-Southern College Twilight Invitational on April... read more