COLUMBIANA – A 36-year-old Sycamore man is being held in the Shelby County Jail on bonds totaling $111,000 after he was charged with allegedly operating a methamphetamine lab in the Shelby Motor Lodge in Alabaster. 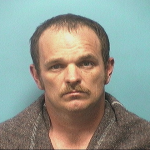 According to Jones’ arrest warrant, he allegedly operated a meth lab and produced the controlled substance at 1550 First St. N. in Alabaster. The warrant lists an April 3 offense date.

Jones allegedly was in possession of methamphetamine and a glass pipe at the time of his arrest.