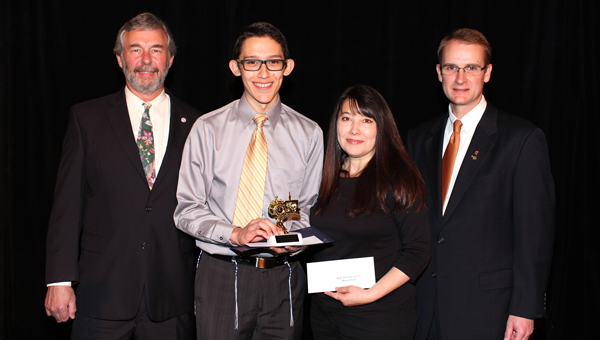 The students competed in the Farm-City poster, essay and multimedia contests, which tasked contestants with explaining the importance of the link between farmers and their city neighbors.

As a result of his first-place finish, Ruiz and Hope Christian School each received $300 during the Alabama Farmers Cooperative’s Farm-City awards luncheon on April 2 in Birmingham.

In the 10th-12th-grade essay portion of the contest, HCS junior Laurin Bell took home second place, earning $200 for herself and the school. Bell’s winning essay will be featured on the 2016 Farm-City calendar.

HCS freshman Kinley Bell won second place in the essay contest’s seventh-through-ninth-grade contest. As a result Kinley Bell also won $200 for herself and for Hope, and will have her essay featured in the 2016 Farm-City calendar.

“This year’s theme is ‘Agriculture: 365 Sunrises and 7 Billion Mouths to Feed,’” State Farm-City Chairman Jeff Helms wrote in a release. “These contests give students the opportunity to learn more about the vital link between urban cities and rural farms and how they both work together to ensure we have the safest, most affordable food source in the world.”

Sonya King of Two by Two Animal Rescue in Helena holds up a a proposal that would place a new... read more