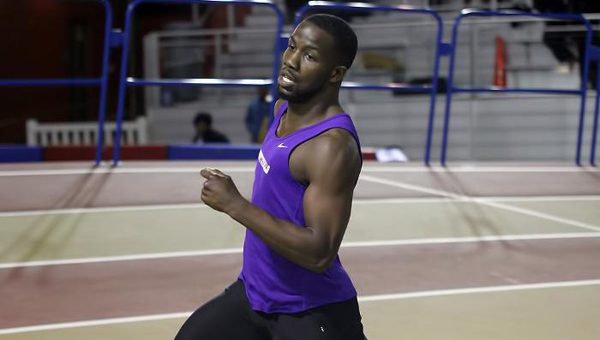 Leroy Moore finished second in the 100-meter dash and the 200-meter dash at the Birmingham-Southern College Twilight Invitational on April 3. The Falcons finished third overall in the competition. (Contributed)

Sophomore Donny Barnes won the 5,000-meter run individual title with his time of 15:01.57, which placed him nearly 17 seconds ahead of runner-up finisher Christopher Roberts of Birmingham-Southern. Sophomore teammate Jordan Strong finished fourth overall in the event with his time of 16:27.86.

Pirrello also finished fifth overall in the 3,000-meter steeplechase event with a time of 10:33.55.

Freshman Alex Knight finished runner-up to Chris Thrasher of Samford in the pole vault competition with his attempt of 13 feet, 3.50 inches, just under two feet behind Thrasher.

The Falcons will return to action April 16-18 when the University of Montevallo hosts the 2015 Peach Belt Conference Championship. Information on the event is available online at Static.psbin.com/y/y/7141pyf35uulea/TF_Championship_Guide.pdf.