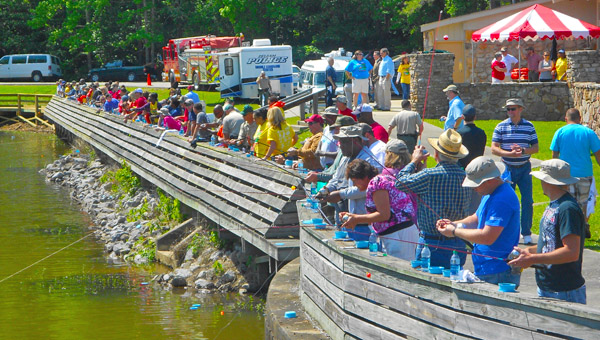 The Pelham City Council agreed to sponsor the 2015 “Gone Fishin,’ Not Just Wishin'” event during a council meeting on April 6. (File)

PELHAM – The Pelham City Council has agreed to sponsor the annual “Gone Fishin’, Not Just Wishin'” event again this year.

The council approved during an April 6 meeting a donation to the Jefferson County Schools Education Foundation for sponsorship of the event, which is in its 21st year of allowing hundreds of special needs students from Shelby and Jefferson counties to learn the basics of fishing from fishing coaches.

“This is something we’ve sponsored in the past,” Pelham City Council President Rick Hayes said. “It’s just gotten great feedback.”

Pelham Police Chief Larry Palmer thanked the council for their consideration of his department’s inquiry about sponsoring the three-day event in May.

“This is a great program,” Palmer said. “These kids have a wonderful day, and they talk about it for an entire year. ”

Palmer said corporate sponsorship for the event beyond this year is in jeopardy.

“This year will be taken care of, but this program is in jeopardy because of corporate sponsorship,” Palmer said. “We want to work hard to make sure it happens from this point forward.”

The council also approved the financial support of Oak Mountain Lanes in its effort to host the AHSAA Bowling State Championships Meet in Pelham in January 2016.

If Oak Mountain Lanes’ bid to host the meet is approved, the bowling alley has the opportunity to bid for hosting the next two years’ meets.

“I just think it would be fantastic to put Pelham on the map for being the first city to host the first AHSAA high school bowling tournament,” Oak Mountain Lanes general manager Tommy Barberini said.

Barberini said bowling alleys that submit bids are analyzed for their layout and how much space they have inside to accommodate large numbers of spectators, along with the facility’s proximity to other businesses, such as hotels and restaurants.

“There’s a high probability that we’ll have it,” Barberini said. “Everything is right there.”