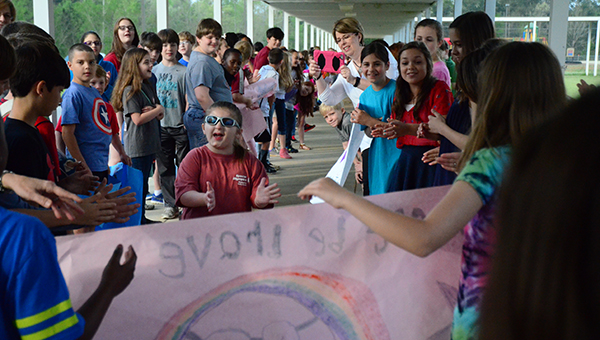 An HIS student competing in the Special Olympics is preparing to run through a poster before boarding the bus as other students and faculty cheer her on. (Reporter Photo/Graham Brooks)

HELENA–Encouraging signs, colorful posters and lots of cheering could be heard coming from the backside of Helena Intermediate School on the morning of Thursday, April 9.

The entire HIS student body and faculty aligned the sidewalk where the buses pick up and drop off and prepared to cheer the HIS special needs students as they boarded a bus to go compete in the Shelby County Special Olympics today in Calera.

Students at HIS worked on signs and posters this week that the Special Olympics competitors could run through as they boarded the bus.

The posters had motivational sayings and colorful artwork that read “let me be brave,” and “you rock! HIS loves you!”

All seven students each had their moment in the spotlight as each came down the sidewalk one by one receiving high fives and then got to run through their own poster before boarding the bus.

HIS Principal Kathy Paiml said that they have the Special Olympics every year but this is the first time the school gave them a nice send-off before competing.

“We did this at the previous school I worked at and I came up with the idea to do it here,” said Paiml. “Its special just seeing their reactions and just getting them excited and it’s showing compassion for the other students. It’s great for everybody involved.”

The student’s faces lit up as they heard the cheers and clapping when coming outside to board the bus.

Special needs students from all over Shelby County will be competing in the Special Olympics on Thursday, April 9.