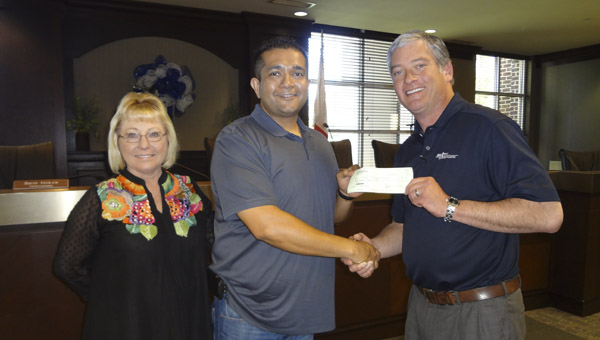 CHELSEA – The Chelsea Business Alliance’s scholarship fund for a local high school senior increased by almost $1,000 after a Chelsea business owner presented his donation to the group at a meeting April 8.

Steve Sewani, owner of the Shell gas station at the intersection of Shelby County 11 and Shelby County 36, gave the CBA a $914.75 check for the scholarship, which will be awarded to a senior in Chelsea High School’s Future Business Leaders of America group this spring.

Sewani pledged to donate one penny per gallon of gas sold at the station during March to the scholarship fund. He said he plans to hold another fundraiser.

“Chelsea has been the best experience for me,” Sewani said. “This feels like home.”

The CBA raised more than $3,000 at a Flapjack Fundraiser event on Feb. 7 at Applebee’s in Chelsea to raise money for the scholarship.

The total amount of the scholarship will be announced when it is presented to the recipient in May.

A committee comprised of CBA members and school faculty members will select the recipient of the 2015 scholarship.

In other business, Chelsea City Councilmen Tony Picklesimer and Dale Neuendorf gave those at the meeting an update on the city, including capital improvement projects.

“The business community is the backbone of our community,” Picklesimer said. “We spend so much of our time making what you do more successful.”

“It’s the desire of the council to seek professional help to bring in the right kinds of businesses … the kinds of businesses that will compliment you,” Picklesimer said. “It’s an exciting thing. I really feel like it’s something we need to do. We should be making a decision pretty soon.”

Neuendorf talked about construction progress on the Chelsea Community Center on Shelby County 47 and the sports complex off Shelby County 11 near Chelsea High School.

Neuendorf said the community center is about two-thirds completed and should be ready for use by July, and crews just finished grading the land for the sports complex’s ball fields.

“There’s a lot of growth going on,” Picklesimer said. “Through the recession, our revenue held steady. We need to manage our growth and be conservative in our decision-making.”

Neuendorf noted Chelsea does not have property tax and draws all revenue from sales tax.

“A lot of people don’t realize that,” he said.

Sponsors of the CBA luncheon April 8 were Winn-Dixie, Sneaky Pete’s and Golden Flake.

Renasant Bank was a corporate sponsor.

“Businesses are what keep the revenue going,” CBA President Ben Smith said. “Now is the time; get involved.”