COLUMBIANA – A Columbiana man was sentenced to four years in prison after pleading guilty to one count of first-degree rape on April 7. 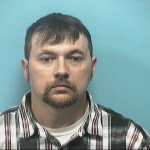 First-degree rape is a Class A felony, and is punishable by up to life in prison.

Wallace has no prior adult felony convictions, according to court documents.

As part of his sentence, Wallace was also ordered to avoid initiating contact with the victim and the victim’s family, and must register as a sex offender and pay a $525 bond fee.

By BAKER ELLIS / Sports Editor The Thompson Lady Warriors took the field again after an 11-day hiatus from the... read more