County manager: OMSP hotel must ‘Stand on its own’ 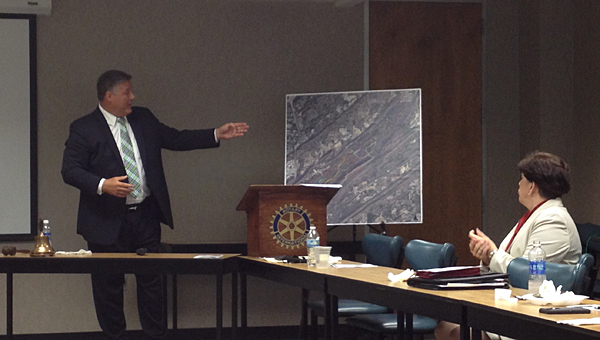 ALABASTER – Shelby County, Pelham and state leaders will not consider bringing a hotel and conference center to Oak Mountain State Park unless the development can support itself financially, County Manager Alex Dudchock told members of the Alabaster-Pelham Rotary Club during an April 9 lunch.

“It must be able to stand on its own without any further financial contributions (from the county, city and state),” Dudchock said. “It must be self-sufficient relative to the revenue it generates. That is some of the analysis that is being done right now.”

Shelby County is working with Pelham and the Alabama Department of Conservation and Natural Resources to study the possibility of bringing the hotel and conference center to the park.

A feasibility study distributed to the Shelby County Commission in February said the park could support a 175-room hotel with between 15,000 and 20,000 square feet of meeting space and 350 parking spaces. Approximately seven acres are needed for the recommended size and scope of the project, according to the summary.

The proposed project has drawn opposition, primarily from the group “Keep Oak Mountain Wild,” which previously filed a five-page response to the county’s feasibility study.

During a March 2 public forum at the Pelham Civic Complex, Keep Oak Mountain Wild presented Alabama State Parks Director Greg Lein with a petition signed by those against the project. Lein said no decision has been made on the proposed development.

Dudchock said the state, county and Pelham leaders currently are “looking at every single aspect” of the project before making a recommendation on the proposal’s future.

“Right now, we are going through legal and determining how it could be financed,” Dudchock said. “I have not made a recommendation to the county commission, nor has the DCNR, nor has Pelham. We are doing our due diligence relative to that project.”

By EMILY SPARACINO / Staff Writer COLUMBIANA – A Columbiana man was sentenced to four years in prison after pleading... read more