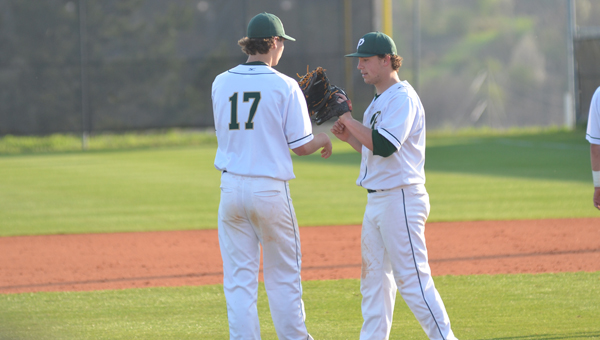 Hunter Orr gives an encouraging word to Sam Finnerty in an early-season game. Finnerty and the Pelham baseball Panthers thrasehd Jackson Olin 38-1 over the course of two games on April 6. (File)

PELHAM – April 6 was a big day for the Pelham baseball Panthers. Pelham welcomed in visiting Jackson Olin from Birmingham for a doubleheader and shellacked the Mustangs for 38 runs over the span of two games, while only surrendering one.

From the outset, the Panthers showed their superiority over the hapless Mustangs as they hung 10 runs on the board in the first inning. Sam Finnerty was the leadoff hitter for Pelham and took the fourth pitch of the bottom of the first inning over the left field wall for a home run, and the floodgates were officially opened. The first six batters reached base safely either via a walk or a hit. With two outs and the bases loaded Hunter Stovall connected on the second pitch of his at-bat for a grand slam home run that brought the Pelham lead to double digits before the first inning was even complete.

Finnerty, Tyler White and Chase Martin all saw action on the mound and kept the Mustang bats at bay, although it did not matter much what any of them did on the hill because of the work by the Panther bats. Pelham registered 17 hits in just four innings as they built the 18-1 lead that called the game early.

The second game was more of the same from both sides. The Panthers used the first inning to plate 12 runs, and Connor Radcliff and Alex Weeks combined to throw four scoreless innings from the mound. Stovall went 2-for-2 from the plate to lead the way for the Pelham bats in the second game that saw Jackson Olin commit seven errors in just four innings.

With the win, the Panthers have won four games in a row, dating back to the IMG National Classic, and stand at 20-8.

Leader of the pack

Larry Dillard, shown here in his trophy room with one of his dogs, Albus, has been raising and training beagles... read more