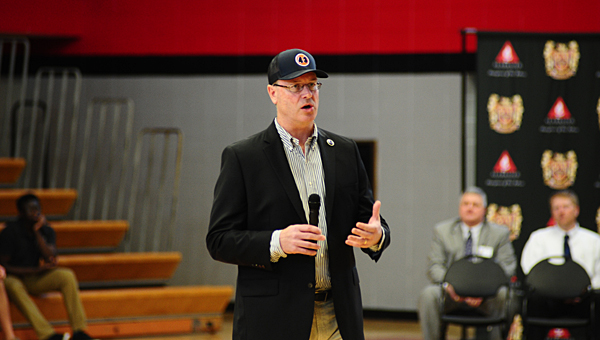 ALABASTER – With Thompson High School’s prom just days away, the father of former Auburn University football standout Philip Lutzenkirchen had a cautionary tale for the school’s junior and seniors on April 9.

“You have temptations coming up starting tomorrow night and the big event on Saturday,” Lutzenkirchen’s father, Mike, told THS upperclassmen during an assembly in the school’s gym. “If you avoid the temptations that Philip did not, you will live a long and prosperous life.”

Philip Lutzenkirchen finished his career at Auburn with 14 touchdown catches, which was the most in Auburn football history for a tight end, and also played a major role in the Tigers’ 2010 national championship run.

After graduating, Lutzenkirchen moved to Montgomery to work in the financial field, and was visiting friends in LaGrange, Ga., when he and driver Joseph Davis died in a vehicle crash at about 2 a.m. on June 29, 2014.

Lutzenkirchen, whose blood-alcohol content was .377 at the time of the crash, was a passenger in the vehicle, was not wearing a seat belt and was thrown 15 feet from the vehicle when it ran off the road traveling 78 miles per hour and overturned.

“The one kid who decided to wear a seat belt walked away with a concussion,” Mike Lutzenkirchen said. “(Philip) felt the temptation of alcohol. Nobody in here is the size he was or has a brain that is mature enough to handle alcohol in moderation.

“I ask you to make a huge decision this weekend and say no,” he added.

During the presentation, Mike Lutzenkirchen spoke of his son’s willingness to help those less fortunate than he was, and cautioned against the dangers of texting and driving and becoming addicted to technology.

When Lutzenkirchen was a freshman at Auburn, he returned to his high school to attend prom with a special-needs classmate, his father said.

“The one question you should ask yourself when you lay your head down at night is ‘How many people felt better today because they met me?’” Mike Lutzenkirchen said.

OMSP and AWC hosting Wings Over Oak Mountain, May 1-3

Join the Alabama Wildlife Center and Oak Mountain State Park for the first edition of Wings Over Oak Mountain, May... read more