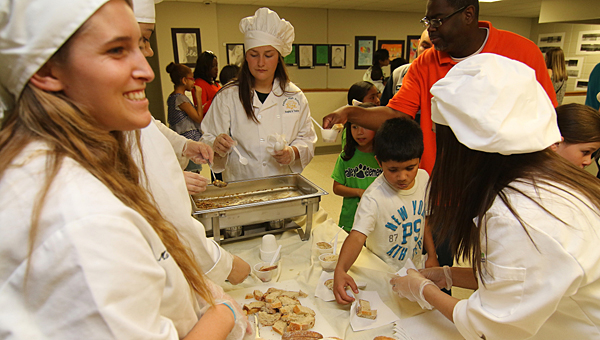 PELHAM—Hundreds of people flooded into the Pelham High School auditorium on Thursday, April 9, for the first Fine Arts Extravaganza, which featured visual arts, culinary arts and performances from Pelham City Schools students of all ages, ranging from kindergarten to 12th grade.

Sherri Campbell, an art teacher at Valley Intermediate School who helped organize the event, said she was pleased but not surprised by the turnout, which caused the auditorium to be standing-room-only.

“Our parents are very supportive so we’re not surprised, but we’re very pleased,” Campbell said.

For Stephanie Garcia, an eighth-grader who plays the clarinet in the band, the night was a chance to see what everyone in the school is able to do.

“I think it’s sort of cool that everyone comes to see what other people can do and create,” Garcia said, noting the artwork was her favorite part of the event.

“It’s really pretty. All the artwork is great,” said her friend, Itzell Ramirez, an eighth grader who plays the flute in the band.

During intermission, the culinary arts program served refreshments including a creole chicken soup with hearth bread.

“(People attending the event) want to get our recipes and try them themselves,” said Bailey Blackburn, an 11th grader in the program, who added that she enjoys getting to the chance to try new recipes and cook in her culinary arts class.

For Caley Peterson, a third grader, the event was a chance to display a ceramic penguin she made in art class and see all of the artwork from other students.

Campbell said the event was organized in part to show how important the arts are for the community.

“We just want to make sure our new school board, administration, and city council understand how important the arts are for our community,” Campbell said. “Now that we’re a new school system we want to get this going right now.”