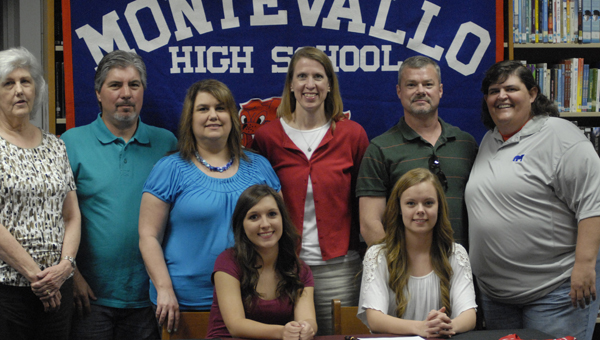 MONTEVALLO – April 10 marked the culmination of the high school athletic careers for Hope Wilder and Ashley Williams. Both girls will attend Judson College in Marion, where they will join the volleyball team in the fall.

Coaches, school officials, family and friends all gathered in the Montevallo High School library to celebrate the high school careers of Wilder and Williams, however head volleyball coach Tena Niven summed up the ceremony the best.

Talking to the rest of the volleyball team and other athletes gathered, Niven sang the praises of her two former players. “I’ve never had to discipline them in any way,” Niven said. “They’ve shown you how to do it and do it right.”

Williams and Wilder, classmates and best friends since the second grade, both began playing volleyball in the eighth grade, but neither gave much thought to playing at the collegiate level.

“We actually didn’t think we were going to (play in college),” Williams said. “I always wanted to but by my senior year I didn’t know if I was good enough.”

“We were interested in Judson just for the college,” Wilder added. “And then they gave us the opportunity to come out (for the team).”

Judson is an all-girls school with a deep religious tradition. When head volleyball coach Cynthia White saw Wilder and Williams praying together before their tryout, White knew these were two girls she wanted in her program.

“I knew right then that I wanted these two,” White said during the ceremony.

The two made the decision to attend Judson about a month ago, they said, where they will also be roommates.

“We’ll probably car pool to school,” Wilder said, speaking to how close the two are off the court.

Williams, who plays back row, and Wilder, a setter, will look to contribute right away to Judson’s team when they arrive on campus late in the summer.