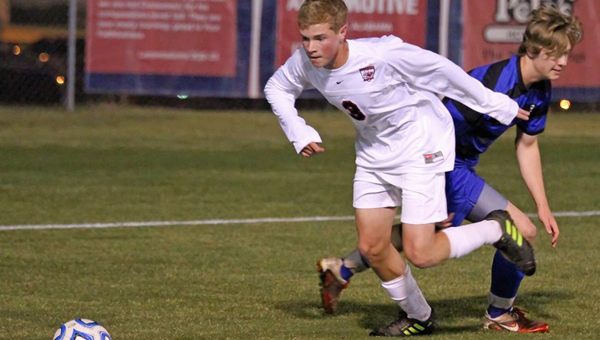 HOOVER – The Oak Mountain boys’ soccer team came into their April 9 showdown with Spain Park in an odd, unfamiliar place. They had not won a game since March 26. The Eagles, currently ranked second in the state by Eurosportscoreboard.com, last left the pitch victorious when they defeated outmatched and outgunned Bessemer City High School 14-0 in a March 26 matchup. The very next day the Eagles played class 6A No. 4 Homewood to a 0-0 tie and then went dormant for 12 days over spring break. When the Eagles finally returned to the field on April 8, they lost for just the third time all season via a slight 1-0 decision to class foe Hoover. The April 9 matchup with Spain Park was a chance for the Eagles to knock the rust off and get back to their winning ways.

The Jaguars have been, to a point, victims of bad luck throughout the course of their 2015 campaign. With a 5-10-2 record before the Oak Mountain game, the Spain Park record leaves something to be desired for the Jaguar faithful. However, closer examination of their schedule will reveal they have only lost two games by more than two goals and have lost five games by just one goal. Offensive output has been the Achilles heel for this Jaguar team, as they have scored over two goals just twice all season. The Oak Mountain game was a chance for this Jaguars team to claim a statement win.

In the early going, the Jaguars looked to be on their way to doing just that. Less than 15 minutes into the first half, Oak Mountain’s Ryan Dearman was called for a foul inside his own penalty box on Omar Hamid, and Hamid calmly scored his eighth goal of the year on the ensuing penalty kick to give Spain Park an early 1-0 lead. The rest of the first half was a back-and-forth, chippy affair, with the referee showing three yellow cards. Neither team was able to turn an opportunity into a goal, and Spain Park led 1-0 at the half.

Less than 10 minutes into the second half, and after a number of chances, Kennedy Davis got on the end of a cross from Nathan Heim and plucked one into the back of the Spain Park net to move the game to a 1-1 tie. Clay McDonald converted his own penalty kick into Oak Mountain’s second goal of the half soon after Davis’ goal to give the Eagles the slight 2-1 advantage.

Spain Park was not done, however, and Josh Taggert scored off an assist from Johnathan Gonzalez on a counterattack with 20 minutes left in the game to bring the score back to even at 2 goals apiece. Less than five minutes later, however, Davis sent a cross deep into the Spain Park defense, which was handled by Hunter Ratliff and calmly deposited into the back of the net to give the Eagles the lead once again at 3-2, which they held on to for the duration of the game to escape with the win.

By BAKER ELLIS / Sports Editor The Thompson Lady Warriors took the field again after an 11-day hiatus from the... read more