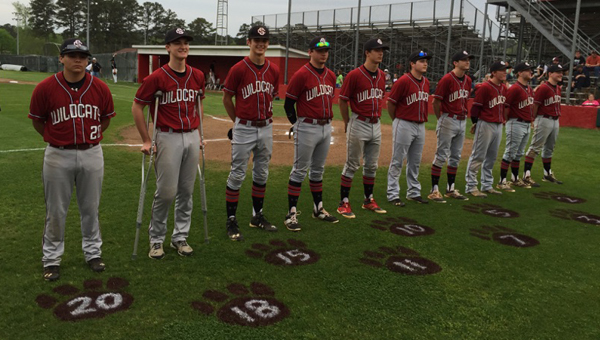 COLUMBIANA – In what was the longest game of the year to date for the home team, and will undoubtedly go down as one of the longest games of the year in the state, the Shelby County baseball Wildcats hosted the Sylacauga Aggies on Thursday, April 9, in a Class 5A Area 8 game that went 14 innings. This was senior night for the Wildcats, and Shelby County said goodbye to 10 senior players, two senior stat men and seven senior diamond dolls, who will be missed tremendously next year. “It’s a special bunch, and I’ve been blessed to know each one of them,” head baseball coach Shane Beasley said.

The junior varsity Wildcats started off the night with a win 3-2 over the Aggies. Chip Nash went the distance for the Wildcats on the mound in the win.

After the JV game, the varsity took the field with a packed house, standing room only. It was an electrified atmosphere as the crowd showed up in full force to pay respect to the senior class.

Shelby County put the first score of the game on the board when Kyle Cofer scored off a Hunter Horton double to left center field to go up 1-0 in the bottom of the first. Later, in the top of the fourth inning, the Aggies tied the game at 1-1 with an unearned run. The 1-1 draw held through the end of the seventh inning, and the teams headed to extra innings.

Spencer Dill, the starting pitcher on the night for Shelby County, continued to toe the mound for the Wildcats. He pitched nine innings and held the Aggies to only one run and two hits and racked up 10 strikeouts and relinquished only two walks.

“Spencer pitched one of the best games I’ve ever seen him pitch tonight, He was a warrior on the mound for us,” said Beasley.

Both Shelby County and Sylacauga continued to make outstanding defensive plays in the field with to keep each other off the scoreboard. Cody Jones took the mound in the 10th inning for the Wildcats and pitched 5 innings. He allowed no runs and two hits, struck out four and gave up one walk.

“Cody kept them off balance and took total command of the mound to finish the game and get the win for us tonight” said Beasley.

Finally, in the bottom of the 14th inning, the stalemate broke. Shelby County loaded the bases with one out on the board. With Horton at third base, Zac Scott came up to the plate and roped a pitch over the center fielder’s head to win the ball game in walk-off fashion.

“It was a great night for baseball and our players played their hearts out from start to finish, I love them all,” said Beasley.