PELHAM – A 28-year-old Midfield man is facing multiple felony charges after he allegedly brought a child younger than 1 year old to an attempted drug deal while smoking marijuana near the infant. 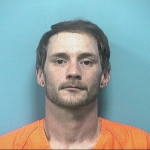 The Shelby County Drug Enforcement Task Force arrested Gregory Hinton Jones, who lists an address on Wilks Boulevard in Midfield, on April 8 and charged him with felony counts of chemical endangerment of a child and attempt to distribute drugs.

Task Force Commander Lt. Kevin Turner said the arrest came after an officer pulled Jones over on Valleydale Road in Pelham on April 8 and allegedly discovered marijuana in the car.

Jones’ arrest warrant alleges Jones was “smoking (marijuana) in close proximity to (the) child,” and claims there were “ashes evident on the child’s face.”

Turner said Jones allegedly was on the way to sell marijuana when the suspect was pulled over and arrested. The two misdemeanor charges came after officers allegedly discovered marijuana and rolling papers in Jones’ vehicle.

Chemical endangerment of a child and attempt to distribute drugs are Class C felonies, and are punishable by up to 10 years in prison apiece upon conviction.

As of April 13, Jones had no defense attorney or future court dates listed in Shelby County court documents.

By NEAL WAGNER / Managing Editor ALABASTER – A 23-year-old Alabaster man is facing up to several decades in prison... read more