COLUMBIANA–A 45-year-old Helena man who was already on probation for previous possession of forged instrument charges is being held in the Shelby County Jail on a $30,000 bond after being charged with trafficking stolen identities. 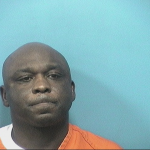 The Shelby County Sheriff’s Office arrested Cedric Allen Smith, who lists an address in the 9000 block of Brook Forest Circle in Helena, on April 10, on one felony count of trafficking stolen identities.

According to Smith’s arrest warrant, Smith allegedly stole a woman’s identity on Jan. 30, 2014, without the authorization or permission of the victim and then transferred a forged check using the woman’s stolen identity.

Trafficking stolen identities is a Class B felony, according to Alabama law. If convicted, Smith could face up to 20 years in prison.