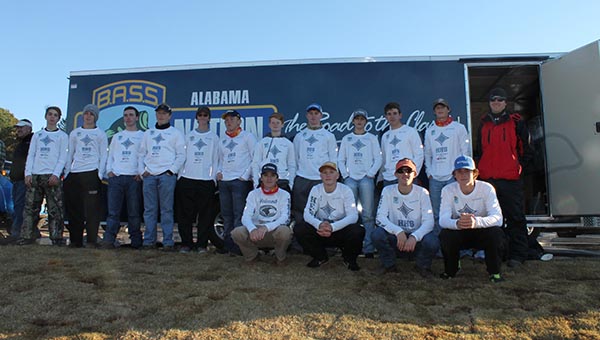 The Helena fishing team, shown here on their first day of a tournament in November, are in their inaugural year of competition. (Contributed)

HELENA–In their inaugural season fishing as a club, the 18 member Helena High School bass fishing club has had great success as they move towards the state tournament at the end of May.

Helena has two fishing tournaments left on their schedule that includes one on Lake Neely Henry on April 25 and then the state tournament that takes place May 22-23 on Lake Eufaula.

Daniel Statum, a former member of the University of Alabama fishing team and Helena native, is now the HHS fishing coach and he’s really proud of the way his team has competed in tournaments.

“We are looking strong for a first year team,” said Statum. “We have made a lot of improvements and we’ve already had six two-person teams qualify for the state tournament.”

The Helena fishing team has 18 members who break off into two-person teams to fish in tournaments.

In a typical tournament, hundreds of teams from around the state of Alabama show up to compete and bag the biggest limit of fish.

Each two-person team will keep their five largest fish to be weighed and see how they stack up against other high school teams across the state.

Statum said that the team meets once a month to discuss strategies and how they’ll fish the next tournament.

“The fish are in a transition period right now and they move up to more shallow water and the temperature rises,” said Statum. “We will discuss these things and what lures to use and things like that at our meetings.”

Statum said the state tournament in May could see as many as 200 plus boats with teams competing.

After the state tournament, the Helena fishing team plans on hosting a benefit tournament.