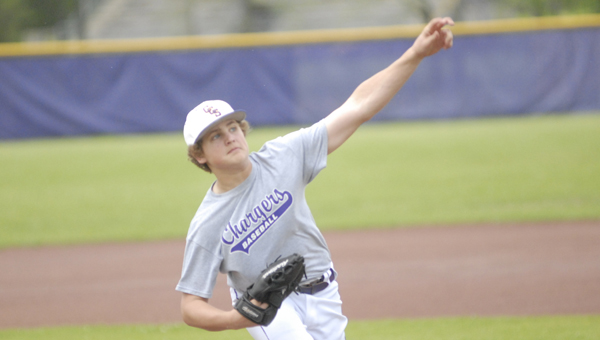 Cornerstone eighth-grader Wil LaFollette throws with both his right and his left arm from the mound. The Chargers are currently in the midst of an historic season. They are 16-7 on the year and went 9-0 in their area. They will take the field next Thursday, April 23 in the AISA state playoffs. (Reporter Photo / Baker Ellis)

Wil LaFollette and his father, Grant, are the only people on the Cornerstone baseball field on this Friday afternoon. 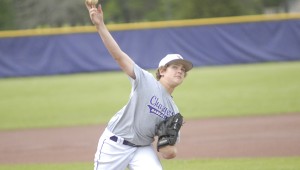 Wil LaFollete, only an eighth-grader, is a recent transfer to the Chargers’ program, coming by way of Oak Mountain this past Christmas break. He’s a pitcher who has seen time with both the JV and varsity squads this season. On this day, he is getting some light pitching work in before the weather turns bad.

LaFollette begins to warm up casually with his father before getting serious. A natural right-hander, he begins to throw. He’s still young, but he already has good control and seems at home on the mound. After six or seven throws he slowly, casually takes his glove off his left hand and slides it on to his right. He does this so nonchalantly that, unless you’re looking for it, you won’t even notice. With the ball in his left hand now, he continues pitching, with no perceptible drop in accuracy or velocity.

This is LaFollette’s ace in the hole. A natural righty, he began to teach himself how to throw with his left hand before he was 10 years old.

“I’ve always been fascinated with left-handed pitchers,” LaFollette said. “So I thought I wanted to be one, too. So I just started working at it.”

This is the first year LaFollette feels truly comfortable pitching with either arm in a game, and attests that the first time he pitched with his off hand in a game last season, he wasn’t nervous, but said with a smirk, “it freaked out the other team, though.”

“It’s very, very rare,” his father, Grant attested. “There’s a guy now in the A’s organization that can do it, but it’s rare. He basically taught himself with a tennis ball and a concrete wall. It took him a while to be able to place it where he wanted it.”

While LaFollette’s unique, self-taught ability is a definite draw to watch this Charger team; he is not the only reason. This Cornerstone team recently won a four-game stint by a gaudy total score of 88-0. The Chargers are 16-7 and finished their area with a perfect 9-0 record. They will play in the second round of the AISA state playoffs starting next Thursday, April 23.