ALABASTER – A 23-year-old Alabaster man is facing up to several decades in prison after he was arrested and charged with allegedly distributing marijuana in Alabaster. 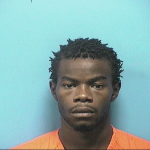 The Shelby County Drug Enforcement Task Force arrested Jordan Larue Cohill, who lists an address on Simmsville Road in Alabaster, on April 11 and charged him with four felony counts of unlawful distribution of a controlled substance.

According to his arrest warrants, Cohill allegedly distributed marijuana from the Cay Clark Apartment complex four times over the past few months. The warrants list offense dates on Dec. 11, 2014, Jan. 5, Jan. 7 and Jan. 20.

As of April 13, Cohill was being held in the Shelby County Jail on bonds totaling $42,000.

According to Shelby County Circuit Court records, Cohill pleaded guilty to one felony count of second-degree receiving stolen property in Sept. 3, 2013, and was on probation for the crime when he was arrested on the distribution of a controlled substance crime.

Unlawful distribution is a Class B felony, according to Alabama law. If convicted, Cohill could face up to 20 years in prison per charge.