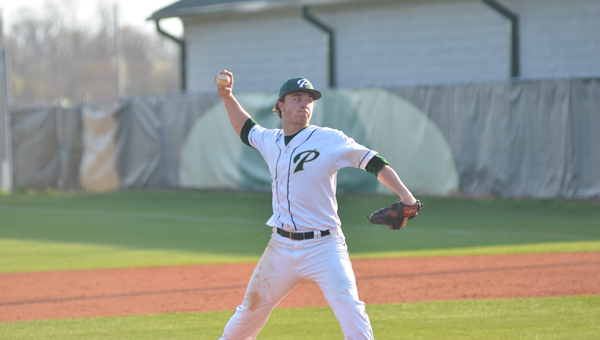 Sam Finnerty pitched a complete game against Thompson on April 10 in a runaway, 13-2 Panthers win. Finnerty was one of three pitchers in as many games who pitched complete games for Pelham over the last two days of the regular season. (File)

The Panthers mauled 7A opponent Thompson in the first game of a doubleheader on April 10. The Warriors, a force to be reckoned with in their own right, were no match for Sam Finnerty, who needed just six innings to down the visitors. The game was Finnerty’s 10th appearance from the mound, and his sixth time where he has thrown at least six innings. Tyler Wilburn led the way for Pelham from the plate with three hits in as many tries, and the Panthers used a five-run fourth inning to give themselves a comfortable lead.

The second of two games between the two squads was much closer. Connor Radcliff took the mound for Pelham across from J.C Parker of Thompson and both pitched complete games. Parker threw 88 pitches over six innings and struck out nine while Radcliff threw 104 pitches over seven innings and struck out six. Pelham was able to knock a single run across the plate in the fourth inning, which proved to be enough with Radcliff manning the helm.

The Panthers paid hapless Clay Chalkville a visit on April 11 and needed only five innings to beat the outmatched Cougars. Tyler Wilburn was the third pitcher in as many games to go the distance from the mound for Pelham, throwing 101 pitches over five innings of work and striking out seven.

“It was a good team win today with a lot of the guys contributing,” Pelham head coach Sean Anderson said of the game. “Tyler threw the ball well today.”

The Panthers will take on McAdory at home on Friday, April 17 at 4:30 and 6:30 p.m. in a doubleheader. If the teams split the opening two games, there will be a third game the following day at 11 a.m.

The Helena fishing team, shown here on their first day of a tournament in November, are in their inaugural year... read more