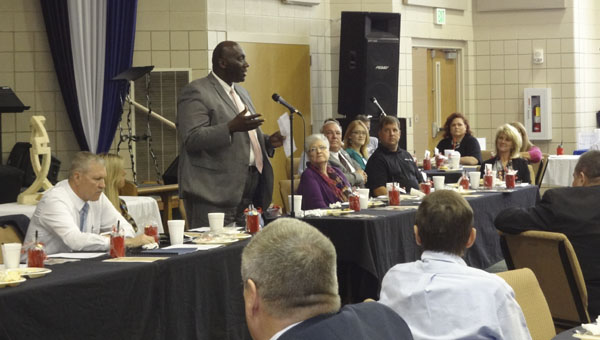 COLUMBIANA – Growth was a recurring theme in the speeches of 10 mayors from municipalities in Shelby County at a South Shelby Chamber of Commerce luncheon on April 9.

Each mayor had about five minutes to update those gathered at Columbiana United Methodist Church on capital projects, businesses and significant happenings in his or her city.

“We are very proud of our Medical Mile,” Handlon said. “We have had a lot of redevelopment on Highway 31 that has contributed to the Medical Mile.”

Calera Mayor Jon Graham said his city passed a $21 million budget this year, and has spent money on parks and recreation and roads and bridges, namely the U.S. 31 overpass at Interstate 65 being expanded from two lanes to seven.

“Calera is continuing to grow,” Graham said. “This year, we invite you to visit us.”

Chelsea City Councilwoman Juanita Champion gave a report from Chelsea on behalf of Mayor Earl Niven, who was unable to attend.

Champion talked about several ongoing capital projects in city limits, including the community center off Alabama 47 and the sports complex off Shelby County 11.

“We are also experiencing magnificent growth,” Champion said, noting the population is about 12,000.

Columbiana Mayor Stancil Handley touted his city as Gov. Robert Bentley’s hometown, and as a place where people could gather on Main Street for live music and not worry about interfering with a congested roadway.

“Columbiana is the farthest municipality from a major highway of any municipality in Shelby County,” Handley said. “We are the seat of county government. There’s always something happening in Columbiana.”

Harpersville Mayor Theoangelo Perkins said his town is celebrating 200 years as a community this year.

Perkins said the Harpersville Public Library is moving across the street into the historic Borum-Darby House, a new police chief was sworn in and the town will soon install new wireless water meters.

“So many positive things are going on,” Hall said. “We’re always open and happy to see you.”

Montevallo Mayor Hollie Cost said there are “more projects going on in Montevallo than ever before,” with a new women’s softball stadium at the end of pedestrian promenade and a new city hall building in the works.

Pelham Mayor Gary Waters commended his fellow mayors for working together well and participating in the Shelby County Mayor’s Roundtable.

“I am proud to be a part of this delegation of mayors,” Waters said. “We collaborate not every day, but regularly on initiatives … We sit down and discuss mutual problems. There is no leadership deficit in Shelby County.”

Westover Mayor Mark McLaughlin said his city, the youngest city in Shelby County, has grown to about 25 square miles with a population of nearly 2,000 since its incorporation in 2001.

McLaughlin said the city accounts for five miles along U.S. 280.

“We anticipate a lot of growth in that area,” McLaughlin said.

Wilsonville Mayor Lee McCarty said an ALDOT project is in progress on Shelby County 25, water and sewer lines will be upgraded and new water meters will be installed.

“We’re managing our money properly and raising a generation of folks that are going to do the same thing,” McCarty said. “We’re going to do it the right way. It is a marvelous place to be.”

“Building permits are up this year,” McAllister said.

Wilton Mayor Joe Fancher was unable to attend the luncheon.