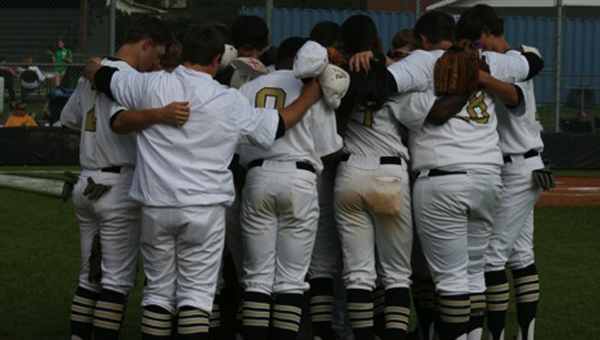 By BRIANA DIGIORGIO / For the Reporter

VINCENT – The Vincent Yellow Jackets said goodbye to their 2015 season on Thursday, April 9, in a tough doubleheader against cross-area opponent Fayetteville.

The Jackets had managed to squeak out a 6-3 victory against Fayetteville on Tuesday, and ended the regular season with a doubleheader against the Wolves two days later. The result was two tough losses for Vincent via final scores of 2-0 and 3-2, which ended the Jacket’s season. Before the doubleheader, Vincent’s record had been 14-14, but with the two losses the Jackets dropped below the .500 mark and finished their season at 14-16.

Vincent will lose seniors Kade Carroll, Austin Whitfield and Sam Lynn off of this year’s roster.

“Us starting from JV, we knew we had a long way to go before we got to senior year, but it got here and we’ve never had a bigger family to play with,” Carroll said.

“We never gave up,” senior Austin Whitfield said. “Our team never quits. We’re all brothers. We’re so close; we’ve played since little league. I wouldn’t trade any of them guys for anybody.”

“I have two families,” senior Sam Lynn added. “My real family and my baseball family. I know they’re always there, no matter what. We know we can rely on each other.”

“They represented this baseball program extremely well,” head coach Cory Williams said. “This is a great group of seniors; they led us in the right direction. That’s a hard fighting group. They love this group of guys. But it’s like I told them, one day they’ll be old like me and they’ll be telling the great stories that we have from the games we’ve played.”

While the Jackets will undoubtedly miss Carroll, Whitfield and Lynn, the young squad will look to rebound in 2016 with a solid campaign spearheaded by their younger players.

By BRIANA DIGIORGIO / For the Reporter GULF SHORES – The Vincent baseball team drove to the salt-water city of... read more