CALERA – A 25-year-old Calera man is being held in the Shelby County Jail on a $15,000 bond after he allegedly struck a young victim in early April, according to Calera police. 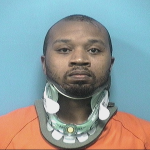 The Calera Police Department arrested Darryl Alan Smith Jr., who lists an address on Village Drive in Calera, on April 10 and charged him with one felony count of willful abuse of a child.

Calera Police Chief Sean Lemley said the case is still under investigation, and said the “abuse was physical assault by hitting the juvenile victim.” Lemley said the arrest came after a family member “reported the incident when the assault occurred.”

The victim was younger than 10, according to court documents. Smith’s arrest warrant lists an April 1 offense date.

Child abuse is a Class C felony, and is punishable by up to 10 years in prison upon conviction.

As of April 14, Smith did not yet have a future court date listed in Shelby County Circuit Court.