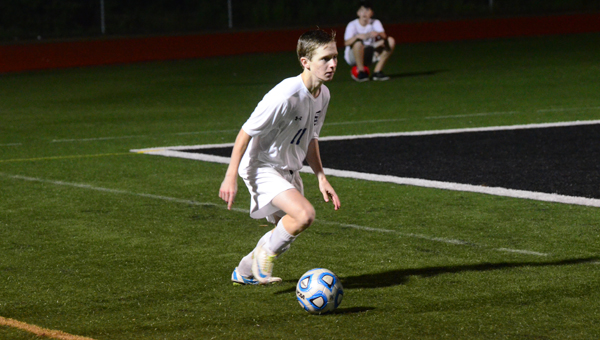 PELHAM – On March 13, the Pelham boys’ soccer team shelled Chelsea 5-0 at home. The Panthers are currently ranked second in the state by Eurosportscoreboard.com and are in the midst of an impressive season. The Hornets are a young, talented squad who have shown flashes of brilliance throughout the season but have rarely been able to string together two complete halves. On April 14, the Hornets finally did just that, defeating Pelham in come-from-behind fashion by a final of 3-2.

The April contest was supposed to take place at Chelsea’s home field, however a game day change of venue led to the two teams taking to the Pelham pitch for the second time this year. In the first half, Chelsea scored the only goal with under 10 minutes left in the first half when Hunter Thomas knocked one past the Pelham keeper to take a slim 1-0 lead into halftime.

As the second half got underway, Pelham seemed to take control back in the game. To minutes into the game, eighth grader Irvin Rodriguez smacked a ball into the back of the Chelsea net to tie the score at 1-1. Rodriguez got loose again with 24 minutes left in the second half to give the Panthers the 2-1 lead. With the momentum seemingly firmly planted in Pelham’s corner, the Hornets responded.

Less than four minutes later, Chris Hill bulldozed his way into the Pelham box and slammed a shot into the back of the Pelham net to tie the score back at two goals apiece.

The second half of the game was tightly contested and emotions ran high. A number of yellow cards were shown and a number of players went down at different points in the half. With 10 minutes left in the game, Chelsea drew a penalty kick. Josh Bartlett, one of Chelsea’s few seniors, calmly stepped up to the line and drilled a low shot into the bottom left corner, which somehow squirted behind the outstretched Pelham keeper’s hands to give the Hornets the 3-2 lead. Chelsea held off the final Panther offensive attacks to steal the win.

“We’re a young team, and we’ve struggled with that (maintaining a lead) all year,” Chelsea head coach Wilee Miller said after the game. “And I feel like this is the first time we’ve looked like a mature team.”

With the win, Chelsea has put themselves in position to claim second place in their area. The Hornets play Briarwood on Friday for second place in the district, and the winner of that game will make the state tournament, while the loser will be sent home.