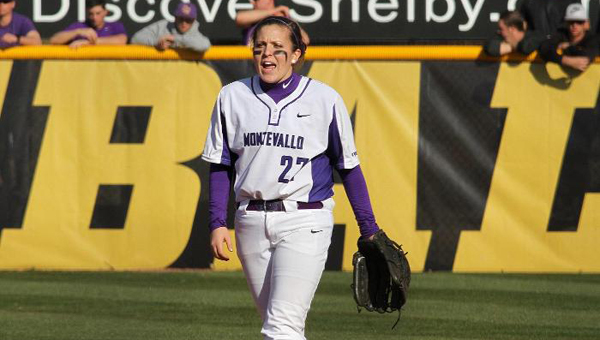 MONTEVALLO – The University of Montevallo softball team played its final Peach Belt Conference doubleheader on Thursday evening, splitting a pair of games with the GRU Augusta Jaguars. Each game was decided by a final score of 3-1.

The Jaguars were victorious in the first game behind a strong effort from Paige Deschaine, who won her 12thgame of the season.

Hannah McCreless and Sydney Abounassar each had doubles for the Falcons.

Lexes Wilson reached base in all three of her plate appearances, drawing a walk and twice getting hit by a pitch.

Phoebe Dabbour drew a pair of walks and had an RBI, and Sydney Aguilar drew one walk.

Jostlyn Higgerson (13-20) took the loss for the Falcons, pitching a complete game.

In the second game, Montevallo would wrap up conference play with a 3-1 win.

The Falcons got on the board in the bottom of the second inning, following a Dabbour single to right center with the bases loaded that plated a pair of runs (Wilson and Aguilar).

A pinch hit double from Caitlyn Glenn in the top of the fourth gave the Jaguars a run, but the attempted second run to cross the plate was out at home after an outfield strike from Aguilar to catcher Shelby Lopez.

Montevallo had a big pinch hit of its own, as Dylan Bailey brought home Lopez for an insurance run in the bottom of the fifth inning on a single to left field.

Jana Kelbie Armstrong started the game for the Falcons and held the Jaguars to one run through 3 1/3 innings.

Higgerson came in to start the fifth and earned the three-inning save, holding the GRU Augusta lineup hitless to close the contest. It was the second save of the year for the junior from Enterprise.

McCreless went 2-for-3 with a triple in the game.