Galloway portrays Aladdin on ‘Dancing with the Stars’ 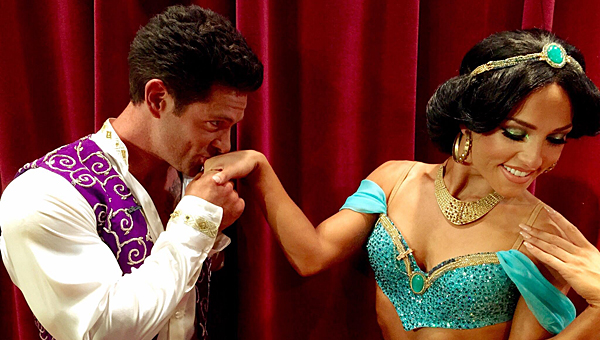 Alabaster’s Noah Galloway is safe for another week on the “Dancing with the Stars” show after portraying Aladdin during week five of the dance competition and earning praise from the show’s judges.

During the April 13 Disney-themed episode, Galloway and his dance partner Sharna Burgess portrayed Aladdin and Jasmine, respectively, and garnered a 28-out-of-40 score from the judges.

Galloway’s dance featured a foxtrot routine, and he began the performance by descending from the ceiling on a magic carpet.

“Looking at you makes us all believe in magic,” judge Bruno Tonioli told Galloway and Burgess. “Your connection and your interaction are just flawless.”

The judges praised Galloway, who lost portions of his left arm and leg in a 2005 improvised explosive device attack in Iraq, for executing the dance routine despite facing physical challenges.

“Of course we know that (the foxtrot) is a challenge in itself,” judge Julianne Hough said. “One thing that I really loved was your frame was right-on.

“The thing that I love so much is that you have this clear and assertive direction, and when you take a step or when you make a move, it’s confident,” Hough said.

Galloway and Burgess placed fifth-highest on the April 13 show, and were 11 points behind top-scoring couple Rumer Willis and Valentin Chmerkovskiy. Suzanne Somers and Tony Dovolani were eliminated during the show, leaving only eight couples remaining in the competition.

While judge Carrie Ann Inaba urged Galloway and Burgess to add more content to their routines, she praised Galloway for serving as an inspiration to others.

“You’ve just captures the hearts and the imaginations of everybody out here,” Inaba said.

Judge Len Goodman said he “tries to judge one (competitor) against the other” each week, and said Galloway demonstrated “sway, great lines and musicality” in his performance.

“Because of your challenges, you lack some of the elements of a foxtrot,” Goodman said. “But overall, you’re great.”

Thousands enjoyed the HES Spring Fling April 10-12. Saturday was one of the more popular days because of the sunny... read more