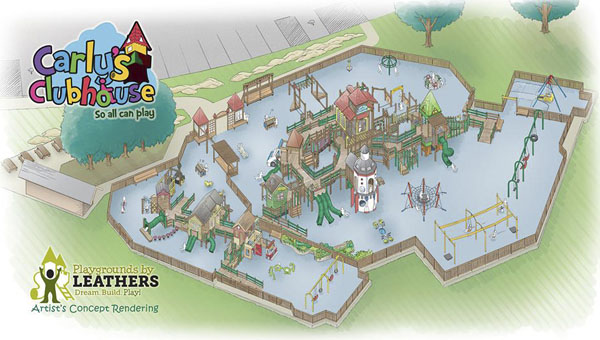 An adult hockey game at the Pelham Ice Arena on April 20 will double as a fundraiser for Carly’s Clubhouse, an all-inclusive playground to be built in Pelham. (Contributed)

PELHAM – Members of an adult hockey league in Pelham will go head-to-head on the ice April 20 to raise money for a project to build an all-inclusive community playground called Carly’s Clubhouse.

The adult development hockey league, also known as the D league, at the Pelham Ice Arena will play a regular game at 7:45 p.m. Admission is free, but all donations will benefit Carly’s Clubhouse.

“What we’re trying to do is create some awareness about the (hockey) program and do a joint effort to benefit (Carly’s Clubhouse) as well,” Hockey Director Randy Murphy said. “It sort of worked out to be a dual win-win.”

Those who attend the game can donate $10 to enter their names in a raffle for a riding lawnmower.

All proceeds from raffle ticket sales will benefit Carly’s Clubhouse.

“We want people to come,” event organizer David Arnott said. “At the end of the day, it’s fun and it’s a nice hour-and-a-half family activity.”

“Our fundraising goals are still the same as they’ve been since we kicked off the project last summer,” Chandler said. “We have raised about $30,000. We are obviously a long way from our goal, but we’ve got to keep putting on these fundraisers to raise money and to raise awareness about what Carly’s Clubhouse truly means to the region.”

Carly’s Clubhouse will include a wheelchair-accessible merry-go-round and zip line, and will be funded by donations such as those to be collected at the hockey game.

“Carly’s Clubhouse is not just for the special needs children; it’s for all children,” Chandler said. “We’re trying to provide something to do for every child, no matter what your capabilities are. Part of the vision for Carly’s Clubhouse is for the community and region to come together and work toward this goal of $800,000.”

Murphy said the event is also designed to create awareness of the adult hockey league in case other local residents are interested in getting involved.

“These guys are brand new to the sport, but they obviously love the game,” Murphy said. “The idea was to create a little more awareness by promoting it through Carly’s Clubhouse. It’s a great cause, and we jumped on it as soon as we learned we could do this.”