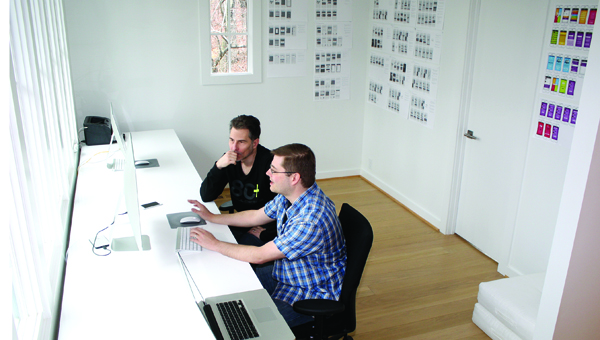 Though it may sound like something out of Silicon Valley, Some App Company is located in the heart of Mt Laurel, in the home of Joanna Lea and Markus Beige.

The husband and wife duo, along with developer Jason Terry, released their first game app, Thumb It, in October 2014.

Similar to the classic 1980s game, Simon, Thumb It takes players through a series of increasingly difficult color sequences. Players swipe and tap through combinations and levels, and can compete for a high score among their friends, and among Thumb It users worldwide.

“I wanted to do a game for a long time,” Beige said. “I play games on my iPhone or iPad to relax.”

A design director at Birmingham-based advertising agency, Luckie and Company, Beige has extensive experience in web and app design for clients, but before Thumb It, he had never designed something for himself.

Beige explained he approached the task like a job assignment, and after brainstorming, the idea for Thumb It was born. The entire project took Beige and Terry nine months to complete.

“I’m just a little bit of a perfectionist, but you really have to be,” Beige said with a laugh. “There’s just so much to think about. What if you get a call, or what if you get a text?”

Designing Thumb It was not all work, Lea and Beige had creative fun with the process, using a bright color scheme, silly sounds and adding in customizable avatars, called “thumbatars.”

Although simple and fun, Beige is quick to note that Thumb It is not “just a mindless game.” Rather, it requires consistent attention and a strong memory.

“At first, I wanted to do something that’s fun and simple, but it really does train your memory, and I really like that aspect of it,” Beige said.

Players start as a “pea brain” and advance through levels to become an “Einstein,” and compete against friends to see who has the bigger brain.

Thumb It is free to download on the iTunes App Store. More information can be found online at Thumbitgame.com.

By NEAL WAGNER / Managing Editor CALERA – A 25-year-old Calera man is being held in the Shelby County Jail... read more