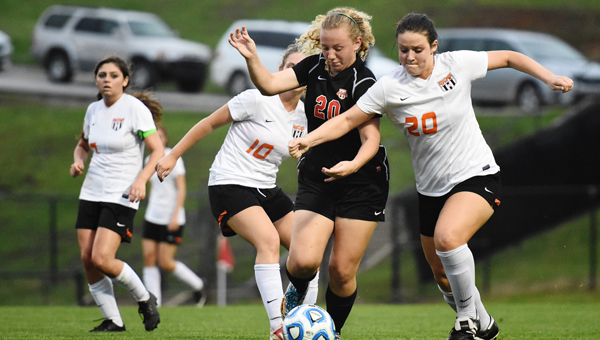 HOOVER – The Oak Mountain Lady Eagles have already wrapped up the top overall seed in the talent-rich Area 5 of class 7A. The two contenders for the coveted second seed, and more importantly, second playoff slot, were Thompson and Hoover, who battled on April 14 to decide who was going to the postseason and who was not.

The two teams have played twice already this season, once in an area matchup and once in the semi-finals of the Metro Tournament, and the Lady Warriors have won both of those contests by identical 2-1 scores. The Lady Bucs beat Oak Mountain earlier in the year while the Lady Eagles have swept the regular season series with Thompson. All the Lady Warriors needed to do was win, and they were going to the state tournament.

The game was as close as could be expected with both teams fighting to prolong their seasons. One of Thompson’s senior leaders, Britney Yoder, scored on an assist from fellow senior Mariah Poe at the 25 minute mark in the first half of play to take an early 1-0 lead. The lead held for the remainder of the first half.

In the second half, both teams battled back and forth, but neither was able to produce a goal, and Thompson emerged victorious via the 1-0 decision. With the win, the Lady Warriors advanced to 3-2 in area play and will play the top seed in Area 6 in the first round of the 7A state tournament next week.

In the meantime, Thompson hosts Tuscaloosa County on Thursday, April 16, for the last home game of the season, which will also be senior night.