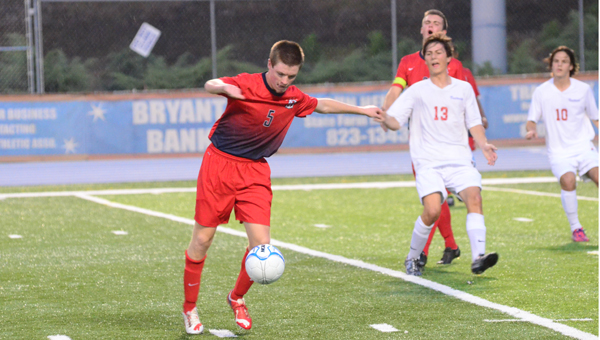 Chad Jeter of Oak Mountain turns to take one of the few decent chances at goal the Eagles had in a April 14 matchup with rival Vestavia. The two teams are ranked second and third in the state, respectively, but the Eagles could not match the Rebels on this night, and fell 4-0. (Reporter Photo / Baker Ellis)

VESTAVIA HILLS – The Oak Mountain boys’ soccer team has won 17 games this season as of April 15. They have lost only four times and tied just once. They are ranked second in the state, regardless of classification, behind only the Patriots of Bob Jones High School, who also account for one of the Eagle’s four losses this year. In games the Eagles have won, they have outscored their opponents by a whopping 72 goals to 11, which works out to an average of 4.2 goals for and .6 goals against per game won. That’s impressive.

In the four games the Eagles have lost, half of them have now come against Vestavia Hills. The potent Oak Mountain offense has been stifled to the point of frustration for Daniel DeMasters’ squad. In the two games they have played, the Rebels have outscored the Eagles 6-0. Vestavia is ranked third in the state while 7A Area 5 opponent Hoover, the only other team Oak Mountain has lost to, is ranked fourth.

The second game between Vestavia and Oak Mountain took place on April 14. After Vestavia scored first at the 28-minute mark of the first half via a nasty rip from about 20 yards out, the Eagles settled down some. Chad Jeter and Kennedy Davis tried to get on the end of a couple of long passes from teammates, but never were able to truly threaten the Rebels’ back line in the first half. Trigg Langner had one of the only decent chances for the Eagles in the first half, when his free kick from 30 yards out was denied by the Vestavia keeper. Ryan Dearman, the Oak Mountain keeper, made a number of critical saves to keep the Eagles close in the first half, but another nice offensive series for the Rebels led to a goal, and the Eagles trailed 2-0 at the halfway point.

The second half faired no different, and the Rebels scored twice more to win the game 4-0. With the loss, and the Hoover result over Thompson on the same night, the Eagles fell to second place in Area 5 of 7A, and will take on the 7A Area 6 champion in the first round of the state tournament, which just so happens to be the Rebels. The game will take place at Vestavia on April 28.