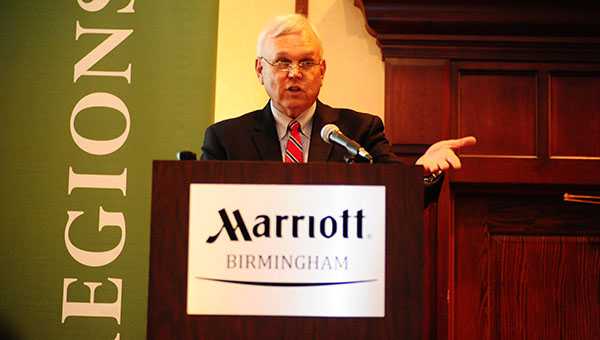 Schools from all across Shelby County set up booths and tables at the Birmingham Marriott highlighting some of their schools biggest accomplishments and achievements from 2014.

Guests in attendance were treated to lunch while watching a few videos on some inspiring stories that happened in Shelby County Schools this past year.

“Education has no room for spectators, we all have to be active participants and I truly believe everyone in Shelby County are active participants and that’s why we continue to be successful,” said Fuller. “We are very optimistic about the future of Shelby County Schools because we have a plan and a process to continue to invest the needs and move forward.”

Brochures were provided that showed key facts and statistics about the state of the Shelby County School System for 2014 and the overall outlook was very bright this past year.

Some of the highlights were that the graduation rate in 2014 for the Shelby County School System was 95 percent while being the seventh largest school system in the state with 20,045 total students.

Close to $20.5 million was awarded in scholarships, 2,243 students enrolled in Advanced Placement courses and 81 percent of graduating seniors planned to attend two or four-year colleges according to the statistics provided.

Fuller thanked city leaders and board members for their continued and dedicated support to help keep the school system at a top level in the state.