Spain Park back in playoffs 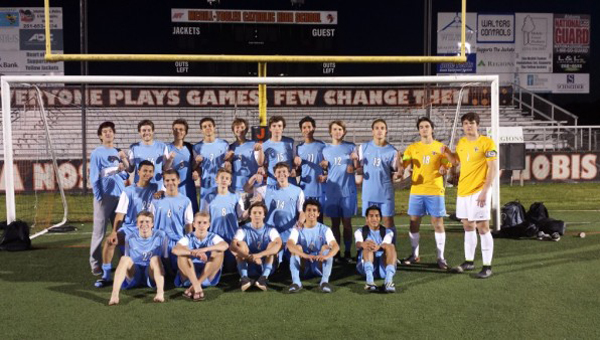 The Spain Park boys’ soccer team, shown here earlier this year, is back in the state tournament after not qualifying in 2014. (Contributed)

HOOVER – Spain Park (6-11-2) is, by every conceivable metric, smack in the geographical center of the best high school soccer region in the state. Three of the top four boys’ teams in the state, regardless of class, are Oak Mountain, Vestavia Hills and Hoover, all of which are within 12 miles of the Jaguars, who are currently ranked ninth in class 7A in their own right. Spain Park has played these three schools nine times collectively this season. Such a bevy of talent in such a close proximity might be an aggravation, or at least a slight annoyance for some coaches, but not for Matt Hall and his senior-laden Jaguar squad.

“The number one thing going into this season was I wanted us to be tested,” Hall said in an April 15 phone interview. “We have been.”

Saying this Jaguar team has been “tested” is an understatement along the same lines as calling a tornado “windy” or a monsoon “wet.” It may be true, but it doesn’t really capture the whole picture. To put the difficulty of their schedule in perspective, only two teams the Jaguars have played this season currently have losing records, and the 10 teams Spain Park has played that are at or above .500 are a cumulative 133-52-24 as of April 15. That works out to a win percentage of roughly 70 percent, which is ludicrous.

This team has been led all year by co-captains Erik Henze and Galen Curry. Henze, a defender, has been a captain for the Jaguars since he was a junior, and will play for UAB in the fall. Curry, according to Hall, is, “not one of the best, he is the best keeper in the state,” and the two have anchored the Jaguars defense all year.

Though the schedule has been tough, this Jaguar team, rich with seniors (12, to be exact) has used it to their advantage. Hall believes his team is better for the tough schedule, and it showed in their April 14 matchup with Mountain Brook. The game decided which of the two squads received the final playoff bid from Area 6 and went into double overtime. With less than two minutes to go in the game, Michael Glass scored via a corner kick to give Spain Park the thrilling victory and stamped their ticket to the playoffs. When asked about his teams’ postseason aspirations, Hall pulls no punches.

“We’re not considering an early exit at all,” Hall said. “I got a group of guys who feel the only way to get better is by playing top teams. I think we’ve raised our level (of play).”

The road will not get any easier for this Spain Park squad, as their first round matchup will be against one of their most familiar foes, Hoover, on Friday, April 24. However, with a battle tested, senior-laden roster fighting to continue playing, Hall’s Jaguars will look to conjure up some magic.