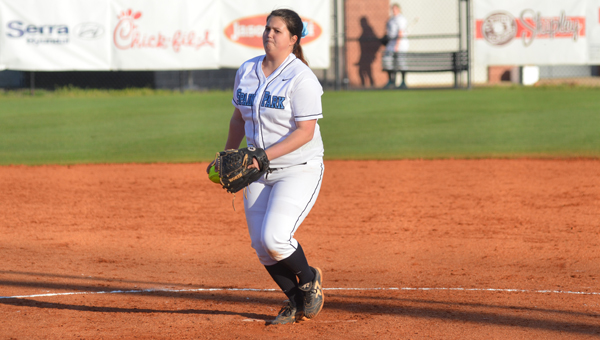 SUMITON – The Spain Park Lady Jaguars’ softball team has been a force to be reckoned with for the entire 2015 campaign. As of April 15, the squad stands at 25-5-2 and has won 11 of their last 13 games. From April 10-11, Spain Park participated in the Sumiton Christian Tournament, where they won four of five games, including a 5-2 win over Oakman before falling to Tuscaloosa County in an offensive-frenzy by a final of 14-10.

Mallory McCarty, as she has multiple times before this season, took the mound for Spain Park and never stepped off. She threw 67 pitches over six innings of work, gave up seven hits and two runs while striking out three. The Lady Jaguars jumped on Oakman early, scoring four of their five runs in the bottom of the first inning. Leadoff hitter Jenna Olszewski took the fourth pitch of the bottom of the first inning over the center field wall for a solo shot to give Spain Park the early 1-0 lead. Later in the inning, with a runner on second base, Destini England took the first offering she saw out over the center field wall for the second bomb of the inning, and gave Spain Park a 4-0 lead before Oakman could blink. The Lady Wildcats added both of their runs in the top of the sixth, however it was too little too late and the Lady Jaguars got the win.

In the first game of the season between these two 7A powers, Tuscaloosa County got the better of Spain Park in a shootout. McCarty started on the mound again for the Lady Jaguars, but was undoubtedly feeling the effects from her complete game earlier in the day. She threw 2.1 innings, gave up eight hits and as many runs, four of them earned, and struck out two. Mary Kathryn Bonamy came in to relive McCarty and did not fare much better, as she relinquished four hits and six runs over the final 1.2 innings.