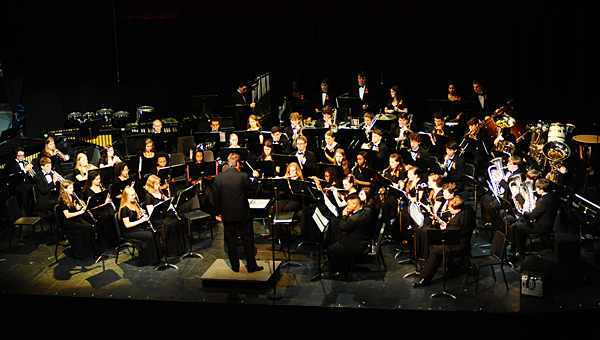 The THS wind ensemble performs a benefit concert for one of its members battling leukemia on April 14 in the school’s auditorium. (Reporter Photo/Neal Wagner)

ALABASTER – Thompson High School Director of Bands Jon Bubbett said he is never one to underestimate the Alabaster community when it comes to supporting an important cause.

“Thompson High School and the Alabaster community really came together on this one,” Bubbett said on April 15, one day after a pair of THS wind ensemble concerts were held at the school to benefit band member Hallie Hartman. “We were very happy and very pleased.”

For the past several weeks, Hartman has been undergoing chemotherapy treatments at Children’s of Alabama in Birmingham, and was expected to go home on April 15 for a few weeks before returning to the hospital to undergo another round of chemotherapy.

During the concerts – one of which was held for THS students and another which was for the public – the wind ensemble performed the same concert it did during the National Concert Band Festival in mid-March.

The student concert, which was held at 9:30 a.m., drew more than 850 students and raised more than $2,800 for the Hartman family. The evening public concert attracted more than 250 attendees, helping the band to smash its $5,000 fundraising goal by collecting a total of $5,500 to help offset Hartman’s medical costs.

Before the evening concert, Hartman’s mother walked onto the stage and thanked the band members for their dedication to helping one of their own.

“We are very excited about what this is going to do,” Bubbett told the evening audience. “Thank you all for coming out and showing your support.”

Assistant THS band director Justin White said he was awestruck by the community’s showing of support.

“This is an exceptional place with a lot of exceptional people,” White told the audience. “I’d like to thank each and every one of you for your contributions.

“No matter how big or how small, your donation is going to make a difference,” White added. “This is a huge deal.”