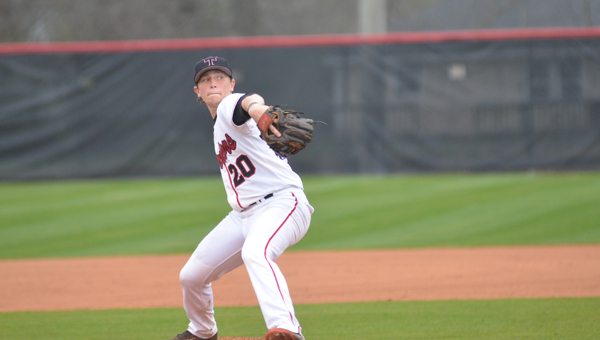 Thompson’s Colin Lillie threw nine innings on April 14 against area foe Oak Mountain in the two teams’ marathon 10-inning contest. The Warriors came out on top and clinched the 7A Area 5 championship in the process by a final of 5-1. (File)

NORTH SHELBY – The Warriors needed 10 innings to get the job done, but at the end of the prolonged evening, they found themselves atop the Class 7A Area 5 leader board after a marathon contest with Oak Mountain, which they eventually won going away by a final of 5-1.

This was a contest between two top area pitchers at the top of their game. Colin Lillie took the mound for the Warriors and lasted nine long innings. He threw 118 pitches, gave up only five hits and one run while striking out six. His counterpart, Blake Schilleci of Oak Mountain, started for the Eagles and lasted eight innings, threw 124 pitches and only relinquished four hits.

Thompson struck first in the top of the first inning. Riley Reach drew a leadoff walk on a 10-pitch at bat, and moved to second base when the next batter, Lance Johnson, singled off the first pitch he saw to put runners at first and second with no outs. Heath Haskins sacrificed to advance Reach to third, and Stephan Poplin hit a sacrifice fly to send Reach home. It was the only run scored by either team for the first six and a half innings.

Down 1-0 in the bottom of the seventh, with the game on the line, the Eagles finally got on the board. The first three batters for Oak Mountain, Brandon Whitaker, Brandon Holsembeck and Trevor Shaw, all hit safely to give the Eagles three of the their five hits on the night all in a bunch. Whitaker doubled before Holsembeck and Shaw singled to load the bases with nobody out. Garrett DeAraujo grounded out to the shortstop, Johnson, which was good enough to score Whitaker from third base. With one out and two runners in scoring position, Lillie buckled down and got the next two batters, Joseph Hartsfield and Joseph McCormick, to fly out to Johnson and Zach Brammer, respectively, to get out of the inning still tied.

Hartsfield came on to relieve Schilleci after eight innings of work, and threw one inning well before the wheels fell off. Hartsfield struck out five batters in his two innings of work, however he also gave up four runs in the top of the 10th inning, punctuated by a late Lillie double, which scored the fifth and final run, to all but seal the win for Thompson. John Curtis Goolsby came on in the bottom of the 10th and did not allow one hit, saving the 5-1 victory for the Warriors in quick fashion.

With the win, Thompson locked up the 7A Area 5 championship, due to the fact it swept Hoover in area play earlier in the year combined with the fact Hoover swept Oak Mountain as well. They advanced to 24-12 and will host the first round of the playoffs on Friday, April 24.

Oak Mountain fell to 16-15-1, and has two more games on its schedule before the season ends. The Eagles will look for a measure of revenge against the Warriors on April 16, when the two teams will square off in a doubleheader at Thompson.