Kids hang out with K-9 Micco 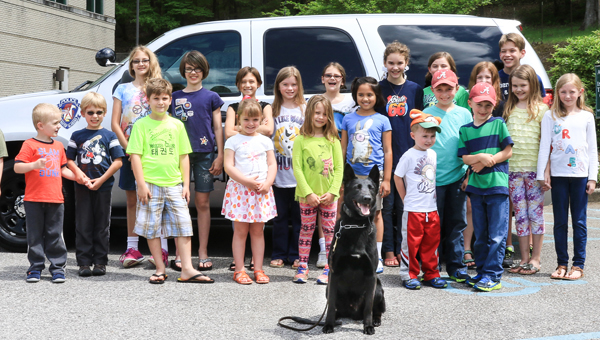 NORTH SHELBY—Kids at the North Shelby Library were treated to a special visitor at the Home School Hangout on April 15. Alabaster Police Officer Hunter Hammonds stopped by with K-9 partner, Micco, to give kids a behind-the-scenes look at the department’s K-9 unit.

“He’s a normal dog, he’s got a crate downstairs and a kennel outside,” Hammonds said of Micco. “He lives with me, he just comes to work with me.”

At three years old, Micco has spent the majority of his life training to be a K-9 officer, Hammonds said. The 62-pound Belgian malinois is a specialized narcotics dog, but Hammonds explained he is also used to help the police find people, such as missing children or people with medical conditions who have wandered from home.

“Anybody that we need to find, he’s very good at doing that,” Hammonds said. “He uses his nose and he tracks the odor.”

Upon successfully tracking an odor and locating its source, Micco is rewarded with a special toy for a job well done, Hammonds said.

Before arriving at the Alabaster Police Department as a K-9 officer in October, Micco completed a rigorous training and selection program.

“There are 10 selection tests before they are selected for police or military working dog status,” Hammonds explained. “One out of every 100 dogs that take that selection test pass it.”

During the one hour program, kids were able to examine Micco’s equipment, such as his muzzle and harness, glimpse inside Hammond’s special K-9 police cruiser and even watch Micco at work, tracking the scent of an object hidden in the room.

The North Shelby Library’s Home School Hangout program brings in interesting visitors each month, allowing kids to learn something new and exciting outside of their regular school lessons.

“We’re always on the lookout for people to come and visit and have something to share,” Assistant Children’s Librarian Kristy Hearn said, adding she hoped the April 15 program would help introduce the children to the local police and make them “feel a little more comfortable with the helpers in the community.”

By EMILY SPARACINO / Staff Writer CHELSEA – The auditorium at Chelsea High School will take on a Broadway-style atmosphere... read more