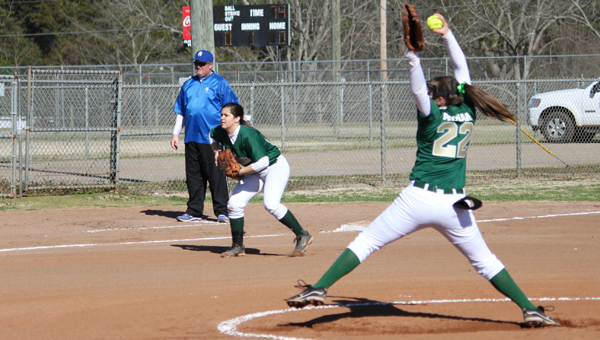 Cadence Crocker (22) and the Pelham Lady Panthers advanced to 13-3 on April 9 and wrapped up the 6A Area 8 championship. (Contributed)

PELHAM – On April 9, the Pelham softball Lady Panthers welcomed visiting Hueytown in a 6A Area 8 showdown. Pelham came away with a close 6-5 win and in the process claimed the area championship.

The Lady Panthers defeated Hueytown earlier in the year on March 24 by a final of 3-1 in an equally close game that saw Cadence Crocker pitch a complete game. This go around, Crocker took the mound again, however she only lasted four innings before being relieved by Hannah Pritchett, who closed the remaining three innings while only surrendering one run.

Pelham scored four of its five runs in the first two innings of play, with two runs scored in the first and second innings, respectively. Hueytown responded with a three-run third inning to close the gap, and notched another run in the top of the sixth to tie the game at four runs apiece.

After the Lady Panthers kept Hueytown off the board in the top of the seventh, they had one more chance to win the game and claim the area championship in regulation. With one out and nobody on base, Sawyer Martin, singled to left field. Dalton Merrill, the very next batter, hammered the second pitch she saw into deep center field, which was good enough for a walk-off double as Martin scored all the way from first.

Martin led the way for the Lady Panthers from the plate, going 3-for-4 from the plate and driving in two runs. Merrill was 2-for-3 with two RBIs and a walk while Kacie Maher and Crocker rounded out the batters who registered hits for Pelham, each with one.

Pelham advanced to 13-3 with the win, and will advance to the state tournament, which will begin on April 24.