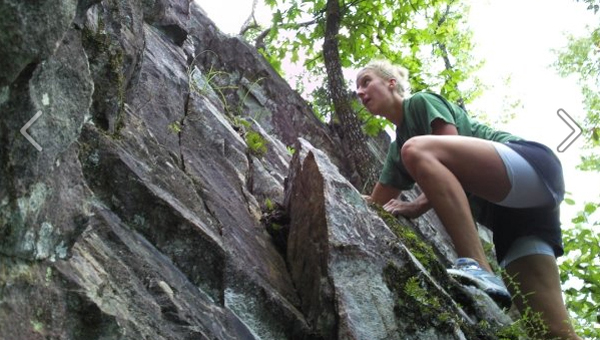 Many people find tremendous refuge under the open sky in the great outdoors, whether it be fishing, hunting, canoeing or in this case, rock climbing. For Lauren Lindberg, a resident of Shelby County, her outdoor solace is found scaling a chalky crag somewhere in the southeast. Lindberg’s interest in rock climbing began while she attended Auburn University when a couple of fellow students insisted she come along on a bolder climb. Ever since then, her interest has grown exponentially.

Since the completion of her education on the Plains, Lindberg has attended First Avenue Rocks, a rock climbing gym in Birmingham, with other fellow climbers and friends. She informed me that the gym is actually her favorite place to climb because its semantics are “always constantly changing and it is always there, rain or shine.”

The gym offers various types of rock climbing walls ranging from difficult to easy and relaxing. “It works you physically and mentally. There is lots of strategy involved with rock climbing,” said Lindberg.

In fact, it is the complexity of the sport that intrigues Lindberg the most. She believes that unlike most sports, where strength is heavily relied on, that rock climbing is a delicate combination of grace, balance and flow. “The only strength you need is in your fingers,” she said.

Lindberg still considers herself a bit of a novice, but has ambitions to branch out further. “If I could climb anywhere in the world right now I’d go as far west as could,” she said. “Probably Wyoming.”

Interestingly enough, she believes that the best overall places to go are here in the southeast. “Palisades, Moss Rock and Mount Cheaha are all great places and are relatively close by.”

If you are looking for a closer location, Lindberg also suggests Horsepen’s 40 near Anniston, which she believes is a great place for bouldering. If you are interested in rock climbing, she recommends a starter kit consisting of five-ten climbing shoes, a bag of chalk, athletic tape and a crash pad. Happy cragging!