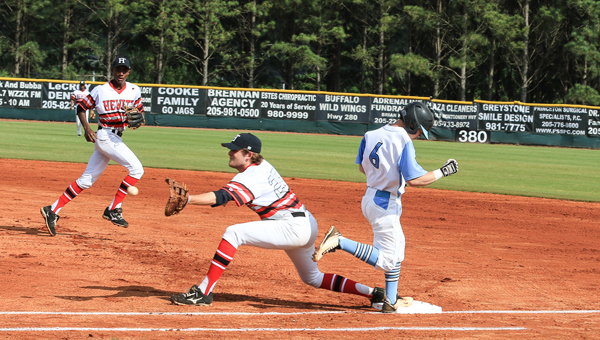 Jacob Rich beats out a throw to first base during Spain Park’s April 15 game against Hewitt Trussville. The Jaguars defeated the Huskies at Hewitt Trussville the day before, but lost at home 0-3. (Contributed/Dawn Harrison )

Over a 24-hour period, class 7A No. 5 Spain Park (19-12) and the eighth-ranked Hewitt-Trussville Huskies played two games and traded wins. The first game was played at Hewitt-Trussville while the second was at Spain Park. The visiting team won both games.

Mason Duke pitched, as he has done so often this season, a complete game for the Jaguars. Duke threw 113 pitches over seven innings, gave up 11 hits and six runs, four of them earned, while striking out eight. The Spain Park bats did enough to give Duke the win, as they were active all afternoon.

With the scales tipped slightly (4-3) in the Jaguars’ favor heading into the fifth inning, Spain Park rattled off three runs in the top of the fifth to build an insurmountable lead. Hewitt-Trussville scored three runs of their own in the bottom of the sixth, but it was too little too late, and Spain Park escaped with the victory.

Rodney Anderson led the way for Spain Park offense with a 4-for-4 effort, while Wade Streeter was also perfect with a 3-for-3 day.

Tristan Lamb and Will Battersby combined to throw a solid game from the mound for the Jaguars, but got no run support from the offense, which could not figure out how to hit Austin Brewer, who pitched a complete game, four-hit effort for the Huskies in the win. Hewitt-Trussville scored two runs in the top of the first and added another run in the top of the fourth to secure the win.

Spain Park will play its last game of the year on Monday, April 20 at home at 4 p.m. against Oak Mountain.

Thompson boys’ soccer will hope to build from this season