Thompson boys’ soccer will hope to build from this season 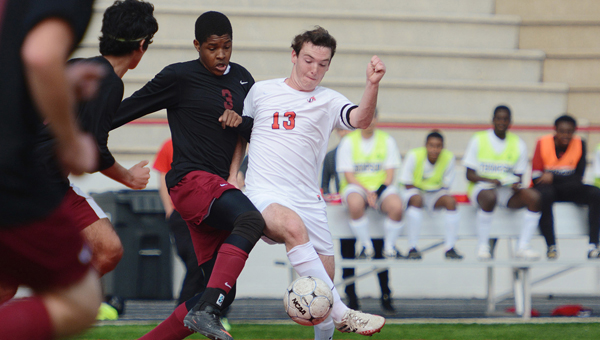 Thompson’s Brady Johnson has helped lead the Thompson Warriors on the soccer pitch this season. (File)

ALABASTER – No one is more familiar with the landscape or history of the Thompson boys soccer program than head coach Rusty Cowley. Cowley, a Thompson graduate in 2008, played center forward for the Warriors before taking his talents to Huntingdon College in Montgomery. Upon his graduation, he returned to his high school alma mater where he is on the verge of completing his second year as the varsity coach. His first year at the helm produced a 5-17-1 record, however his program has bounced back and is 9-9 this season, nearly doubling the win total from a year ago.

Cowley is very familiar with the challenges of trying to be competitive in the talent-infested waters of the Birmingham bubble. Thompson shares an area with Hoover and Oak Mountain, and is directly adjacent to Vestavia Hills, Spain Park and Mountain Brook. Four of those five teams are ranked in the top 10 of class 7A, and three are ranked in the top four in the state, regardless of classification.

“It makes it difficult,” Cowley said in an April 15 phone interview. “It makes it hard for us trying to build (a program).”

While the geographical nature of Thompson’s schedule does not lend itself to many cakewalk games, Cowley believes his team has made strides this season.

“I feel like our results this year have shown we do have the potential to make that step into the next bracket of teams,” Cowley said. “Looking through our scores in recent years, this is the first time we’ve scored on Vestavia since 2007, I think. Small positives like that can build up for us.”

Considering this Warriors’ squad lost six starters off last years’ team and have still drastically improved their record, there are flashes of hope that have Cowley excited for the year and years to come.

“A lot of these first year players have stepped up,” Cowley said.

Kenny Rodriguez is a freshman who is a threat to score whenever he touches the ball, and will grow into a true scoring power as he develops, believes Cowley. Brady Johnson, Brennan Yoder and Sammy Karanja have also led this Warriors team.

The journey is not over for the Warriors’ program, but there is light at the end of the tunnel.