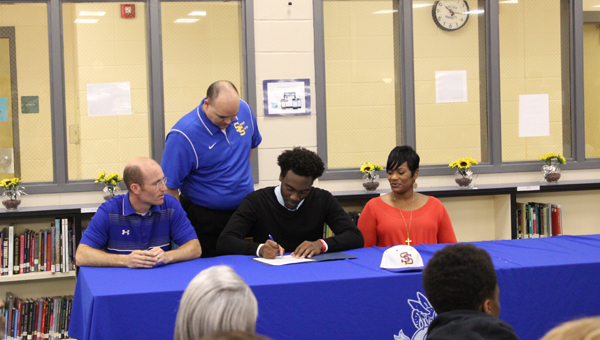 Chelsea’s Darrell Foster signed with Snead State on April 15 to continue his basketball career. Foster averaged 14.7 points and 9.9 rebounds per game in his senior campaign and led the Hornets to the 6A Sweet Sixteen. (Contributed)

CHELSEA – Darrell Foster is polite, attentive, articulate and modest almost to a fault. He has a grin that will slowly spread across his face and come close to touching both ears when on full display, and he will humbly, subconsciously break it out when asked about his athletic prowess.

He doesn’t like to sing his own athletic praises, not that he needs to; his numbers do that for him. Foster was a two-sport standout at Chelsea who played outside linebacker, defensive end and wide receiver for the football team in the fall and spent his winters banging down low as an undersized center for the basketball team. On Wednesday, April 15, he signed a scholarship to continue his basketball career at Snead State in Boaz.

Foster is an instantly likeable figure that holds the respect of opponents and peers alike. He is a broad body that has raw athleticism oozing from his pores. At Chelsea he was the resident junkyard dog on the basketball floor, scrapping in the trenches, finishing tough buckets and snatching rebounds at an incredibly efficient clip.

He averaged a shade less than 15 points and 10 rebounds per game in his senior campaign and led the Hornets to the 6A Sweet Sixteen. He finished his career as Chelsea’s all-time leading rebounder and third all-time leading scorer. Even more impressive is the fact that he only stands about 6-feet-3-inches in height.

At Snead State, Foster thinks he will fit best as a small forward, which means he will need to develop a more mature perimeter game to see ample playing time, but he is ready for the challenge. He’s headed to school just a week-and-a-half after graduation.

Foster said he chose Snead State because he felt wanted by the program. Snead State is a two-year school, and Foster hopes to springboard from the program he will soon be a part of into a four-year school, maybe in California, where a chunk of his family is. All of that is just speculation at this point, and Foster is just excited to be able to keep playing basketball for the time being.

He will enroll at Boaz May 26 and hope to contribute on the basketball floor in the winter.