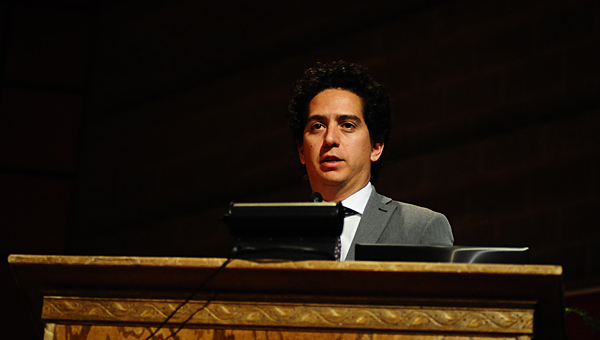 INDIAN SPRINGS – Daniel Alarcón, an Indian Springs School graduate and renowned journalist, was quick to divert praise from himself while accepting the school’s 2015 Outstanding Alumni Award on April 17.

“I’d like to accept this award on behalf of my teachers,” Alarcón told hundreds of ISS teachers, alumni, visitors and students gathered in the school’s Town Hall. “I owe an immense debt of gratitude to my teachers and to my fellow students who always pushed me to be creative.”

Alarcón became the 36th ISS graduate to receive the school’s Outstanding Alumni Award since 1980. After graduating from ISS in 1995, Alarcón earned a bachelor’s degree in anthropology at Columbia University and a master’s degree in creative writing from the University of Iowa.

In 2012, Alarcón became an investigative reporting fellow at the University of California Berkley’s Graduate Journalism School. In fall 2014, he was named the assistant professor of broadcast journalism at Columbia Journalism School.

Alarcón is a Peruvian native, and emigrated with his family to Birmingham when he was a toddler. He often writes about Latin American culture and issues, such as the effects of war on a population, and has received praise from several prestigious publications in the United States and Latin America.

His short story collection, “War by Candlelight” was a finalist for the 2005 PEN-Hemingway Award, and his first novel, “Lost City Radio,” was named the best novel of 2007 by the San Francisco Chronicle and the Washington Post.

His most recent novel, “At Night we Walk in Circles,” was a finalist for the 2014 PEN-Faulkner Award.

Alarcón praised ISS for fostering his creativity while he was a student, and said his teachers were always open to creating unique learning opportunities.

“I certainly felt when I graduated from Indian Springs and went into the world that I was well-prepared,” Alarcón said.