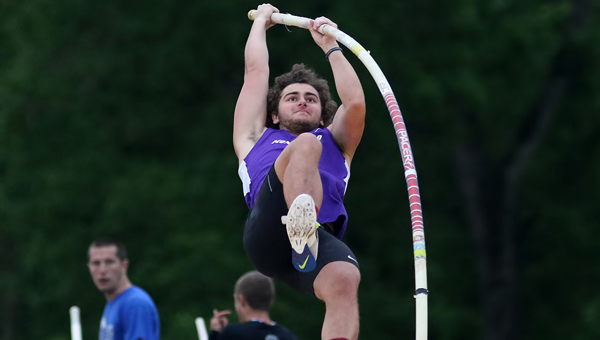 Montevallo freshman Alex Knight won the pole vault in the Peach Belt Conference Track and Field Championships on April 16 in the first day of competition. Knight’s individual win is the first ever individual win for the men’s track team in the Peach Belt Conference Championships. Competition lasts through Saturday. (Contributed)

MONTEVALLO– The University of Montevallo women’s track and field team is currently fourth in team standings after the opening day of the 2015 Peach Belt Conference Track and Field Championships at the brand new on campus track and field facility while the men are in eighth place.

The Lady Falcons racked up 22 points on the first day of the meet, which puts them 10 points behind event leader Alabama-Huntsville.

Sophomores Anna Leinheiser and Cheyenne Thompson provided the highlights for the Falcons in the 1,500-meter run.

The University of Montevallo men’s track and field team is currently eighth in team standings.

The Falcons recorded 12 points on the first day of the meet, which puts them 25.50 points behind event leader GRU Augusta.

Freshman Alex Knight led Montevallo as he captured the program’s first ever individual title in the Peach Belt Conference Championships after claiming the pole vault title with his attempt of 13 feet, 7.75 inches.

Sophomore Brandon Farish finished seventh in the event with his attempt of 11 feet, 8 inches.

Farish is also currently leading the Decathlon standings after four events. Farish led all participants with his time of 11.31 seconds in the 100-meter dash and also paced the field in the high jump competition with his attempt of 6 feet, 6.75 inches.

The event will continue through Saturday, April 18. Action gets underway Friday, April 17 at 9 a.m. with the final Heptathlon events.