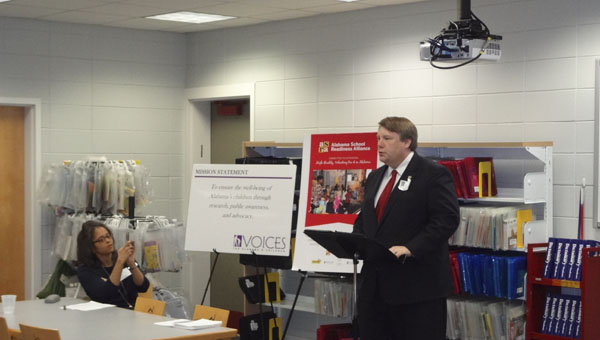 State Sen. Cam Ward, R-Alabaster, and Rep. Matt Fridy, R-Montevallo, spoke about the importance of the program and the need to make it available to more 4-year-olds in Shelby County.

Managed by the Alabama Department of Children’s Affairs, the First Class Pre-K program has been ranked the No. 1 pre-kindergarten program in the country for quality for eight consecutive years, but it only reaches 13 percent of the state’s 4-year-olds, according to a press release.

“Our voluntary First Class-Pre-K program provides those lucky enough to get a spot with the highest quality early childhood education in the nation,” Fridy wrote in the release. “Every family in Alabama deserves an opportunity to enroll their child in our First Class program. I am committed to working with my colleagues to open more classrooms across Shelby County and our state.”

The pre-K program at MVES is funded by a grant and a $40,000 match from Alabaster City Schools, Superintendent Dr. Wayne Vickers said.

The Alabaster school board also funded a similar pre-K program at Creek View Elementary School with local funds totaling about $125,000.

“We feel that is a great investment for our students,” Vickers said of the programs. “We hope to continue to be a leader in that area.”

The Alabama School Readiness Alliance is a partnership of four different organizations: VOICES for Alabama’s Children, A+ Education Partnership, Alabama Giving and the Alabama Partnership for Children.

The Parent VOICES for Pre-K campaign and ASRA are urging state leaders to support the Alabama Senate’s approved $13.5 million increase in funding for the program.

“We are grateful that the state Senate made First Class Pre-K a priority in the education budget,” ASRA Executive Director Allison Muhlendorf wrote in the release. “We encourage the state House of Representatives to approve the $13.5 million increase that was passed by the Senate.”

Vickers said the MVES and CVES programs are in their first year.

Eighteen spots are allotted in each program for students chosen at random in a lottery.

“By adding preschool, we just have an opportunity to love more students,” MVES Principal Rachea Simms said. “This program is invaluable to our school. We are very proud of the success so far.”

More than 20 educators, Alabaster City Schools officials, advocates from the VOICES for Alabama’s Children and Alabama School Readiness Alliance and representatives from the Alabama Department of Children’s Affairs and Alabama Power were present for the legislators’ visit April 20.

Fridy listed positive effects the pre-K program has on children, such as improving school readiness, raising test scores and graduation rates and putting them on track to earn higher salaries in the workforce.

“Investing in Alabama’s pre-K program just makes sense,” Fridy said. “I believe in this program, I believe in its results and I believe every 4-year-old should have access to it in the state.”

The goal is to have the First Class Pre-K program fully funded by 2023, Muhlendorf said.

“We still have a long way to go until all families are reached,” she said.