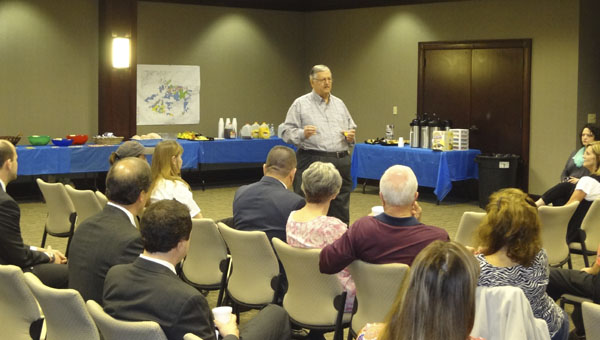 Chelsea Mayor Earl Niven speaks to a crowd at the South Shelby Chamber of Commerce’s Coffee with the Mayor on April 16 at Chelsea City Hall. (Reporter Photo/Emily Sparacino)

CHELSEA – Chelsea Mayor Earl Niven insisted on giving his speech at the South Shelby Chamber of Commerce’s Coffee with the Mayor event April 16 after everyone else had a chance to speak.

“We want to know about you,” Niven said to the group of nearly 30 business representatives, municipal leaders and county residents gathered at Chelsea City Hall. “It is our businesses, our support in the community, that makes Chelsea. We are a family. It’s good to see a group of people meet with a smile on our faces.”

Niven talked about Chelsea’s steady growth, noting the city has issued more than 100 new building permits each of the last three years.

Niven said city leaders are in the process of selecting a retail firm to work with in adding more small and large operations to Chelsea’s business community.

“Do support these businesses because they are what makes Chelsea,” Niven said. “This is a great area.”

He also listed capital projects under way, namely the Chelsea Community Center off Alabama 47 and the sports complex off Shelby County 11.

“We are excited to work with Chelsea and see the tremendous growth,” South Shelby Chamber Executive Director April Stone said. “I’m glad we’re all going to be here working together for the future.”