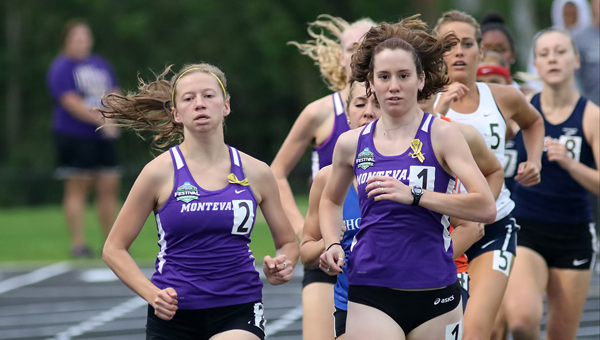 Cheyenne Thompson, left, was named the PBC Women’s Track and Field athlete of the year. Thompson won the 5,000-meter run and the 3,000 meter steeplechase at the PBC track and field championships. The Lady Falcons finished fifth overall while the men finished sixth. (Contributed)

MONTEVALLO– The University of Montevallo finished sixth in team standings in its first ever appearance in the Peach Belt Conference men’s Track and Field Championship at the University’s brand new track and field facility April 18 in the first year of the program while the women finished fifth.

The Falcons recorded 61 points in the Championship. Shorter University claimed the team championship with 154 points.

Junior Xavier Johnson scored six points for Montevallo with his third-place finish in the shot put competition with his mark of 41 feet, 8.50 inches.

Junior Leroy Moore finished fourth overall in the 200-meter dash finals and registered five points for the Falcons with his time of 21.98 seconds.

Sophomore Brandon Farish and freshman Caine Robinson were part of a three-way tie for fourth overall in the high jump competition and gave the Falcons four points each with identical leaps of 6 feet, 2 inches.

Robinson also scored three points for the Falcons with a sixth-place finish in the triple jump competition after recording a mark of 43 feet, 11.25 inches.

University of Montevallo sophomore Cheyenne Thompson was named the 2015 Peach Belt Conference Women’s Track and Field Athlete of the Year in track after a dominant performance during the Championship event.

Thompson won the 5,000-meter run title with her time of 18:11.58. The Chelsea, Alabama native edged Lea Tardanico of UNC Pembroke, who finished runner-up with a time of 18:16.76. Thompson also won the 3,000-meter steeplechase event during the Championship.

Freshman Sierra Millsaps also scored points in the event for the Falcons, finishing third with a time of 18:17.21. Sophomore Katherine Terino just missed registering a point for Montevallo in the event after finishing ninth with a personal record time of 18:42.83.

Sophomore Morgan Booth finished runner-up in the javelin throw with her mark of 118 feet, 5 inches, scoring eight points for the Falcons.

Freshman Yasmin Pettway came in fourth overall in the 100-meter hurdles final with her time of 14.68 seconds, which broke the previous Peach Belt Conference Championship record and gave the Falcons five points.