Pelham advances to second round of 6A playoffs 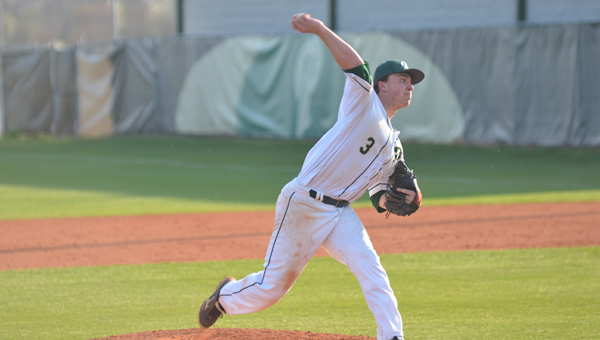 Resident Pelham ace Sam Finnerty threw a complete game in the first game of the first round of the 6A playoffs against McAdory on April 17. The Panthers swept the Yellow Jackets to advance to the second round of the playoffs. (File)

PELHAM – A bevy of offensive support, to the tune of 21 runs over two games, combined with the now-expected efficient pitching of two Pelham aces was more than enough to lead the baseball Panthers (26-9) to an opening round win in the 6A playoffs on April 17 over McAdory. The Panthers defeated the visiting McAdory squad via an 8-0 decision and a 13-0 decision, respectively.

Resident ace Sam Finnerty took the mound for the Panthers and, has he has often done this season, threw seven masterful innings. Finnerty needed just 89 pitches over seven innings to drop the visiting Yellow Jackets, who only managed three hits on the day.

From the plate, the Panthers did more than enough to secure the win. Four runs in the fourth inning was the breaking point, and McAdory could not dig themselves out of the ever-increasing hole they found themselves in. Justin Anderson and Logan Brashier both had three hits on the day. Brashier was a perfect 3-for-3 and drove in three runs while Anderson was 3-for-4 and drove in one. Hunter Stovall and Finnerty each had two hits in the contest as well.

Connor Radcliff followed up on the heels of Finnerty’s effort with a gem of his own. Radcliff threw a complete game, gave up just two hits and struck out seven on the way to the decisive opening round game.

The game stayed relatively close until the fifth inning. With the Panthers only up by a score of 3-0 heading into the top of the fifth, the Panthers knocked three runs across the plate to double their lead and distance themselves farther from the visiting Yellow Jackets. Two innings later, Pelham plated seven runs, and won the game by a score of 13-0 to move on to the second round of the 6A playoffs.

Pelham will take on 6A Area 7 winner Northridge in a best of three series in the second round for a chance to advance to the 6A quarterfinals.