Runners have a rad time at 5K 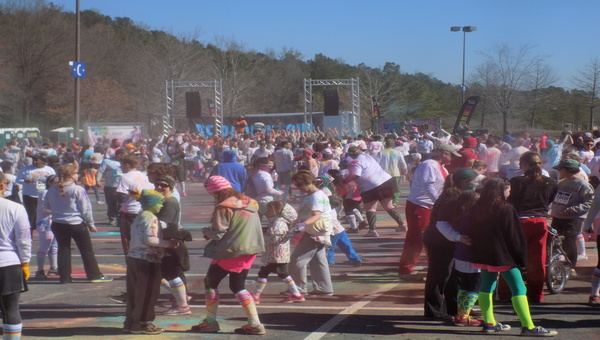 The Color Me Rad 5K brought thousands to the Hoover Met March 28.

The run – part of the “Bigger, Badder, Radder” tour – was March 28 from 9 a.m. to noon at the Hoover Metropolitan Stadium. Last year, the event drew about 3,200 participants, says Gretchen Willard, director of public relations, Color Me Rad 5K.

The event is in more than 100 locations in the United States and several other countries around the world.

When participants arrived, there was music, Zumba and warm-ups. “It’s basically a pre-race party,” Willard says.

Once it began, runners went through eight color stations along the course – which is twice as many as last year. While there, volunteers covered them with powder, gel and liquid colors that really pop in photographs.

“There’s not a chance anyone will come out with a sparkling-white T-shirt,” Willard says. “Instead, they’ll have their own tie-dyed masterpiece.”

At the last color station, each runner received his or her own color packet that they will take to the finishing festival. “There, we’ll have color throws, more contests, dancing and all-out ‘Rad’ time,” she says. “We want this to be the most fun workout of our runners’ year.”

And the party didn’t end after the race is over. There was music, photo opportunities, dancing, contests and vendors.

This race was an exciting time, even for those who weren’t regular runners.

“About half of our participants are first-time runners,” Willard explains. “When you take the competitive aspect out of a 5K and instead focus on fun, you get more people involved in exercise.”

There weren’t any timing clocks or awards for the fastest finishes – only encouragement to have the most fun.

“We’re not worried about people getting their best time,” Willard says. “We just want them to have the best time.”

This race was proof working out can be just as enjoyable as it is beneficial.

“We want people to let loose and have such a great time that they don’t even realize they’re getting a workout at the same time,” she adds. “Color Me Rad is all about encouraging the fun side of fitness.”

She says she has heard from several people they didn’t realize they could run as far as they did after finishing the 5K.

“We tell people that this is a chance to get outside the box and enjoy themselves, spend time with their friends and add some color to their lives,” Willard says. “The overall experience is something you’ll remember as a great time with friends or family.”

Willard encouraged participants to wear white to the event to see a dramatic before and after: “They just need to come ready to have fun.”

Participants received a Rad T-shirt, tattoo, knee-high socks and access to professional photos from the event.

A portion of the proceeds went toward Ronald McDonald House Charities of Alabama.

[This article originally appeared in the March issue of Hoover’s Magazine. Pick up your free copy at one of these locations.]

A new role: Quarterback Mason Duke is ready to lead the Jags to a successful season

The Spain Park High School Jaguars are busy gearing up for the 2014 season. They hope to build upon the... read more